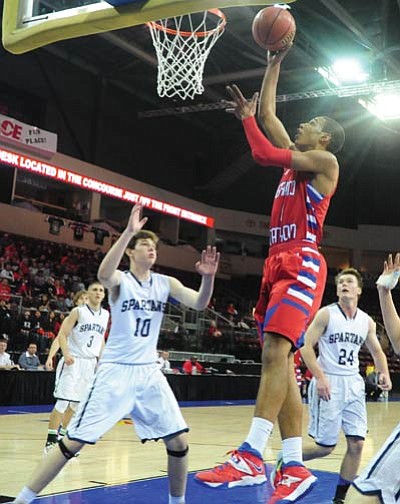 Grand Canyon cut into the lead several times in the second half only to see Scottsdale respond, usually from behind the arc, and push the lead back to double digits.

Bankston led the Phantoms with 28 points, but the potent offense of Scottsdale Prep proved too much for Grand Canyon. The final score was 75-58.

"It was obviously disappointing to see our season end," head coach Dave Beery said. "But I really feel that our boys left everything they had on the floor. They were better than us on the night and they deserved the victory. We played so hard and were so focused. I know when the seniors reflect on their season they won't have any regrets about their performance."

As the season comes to an end, the Phantoms lose a majority of their scoring and leadership from the past few seasons. Bankston has been an all-division player and perhaps the most physically gifted Division IV basketball player in the state during his career. Ethan Berry has put together great career numbers and has been one of the best defenders and is known as one of the most hardest-working players to put on a Phantoms uniform. Justin Jarrell broke the single-season assist record and has connected on over 150 three-pointers in his career as a Phantom.

Grand Canyon is also losing seniors Ethan Jones, who Beery said played a huge role in the state tourney win over Veritas Prep, and Nic Legaspi, who Beery said has made a noticeable leap in leadership and skills during his senior year.

The Phantoms finished their season with a 23-9 record and their third consecutive state tournament appearance.