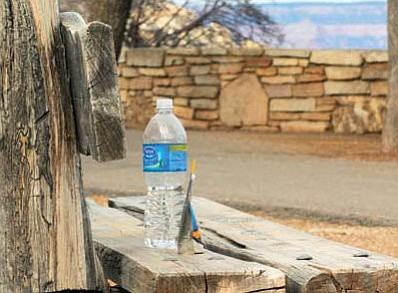 Grand Canyon National Park banned the sale of disposable water bottles like the one pictured above in 2012. Ryan Williams/WGCN

GRAND CANYON, Ariz.- Earth Day is approaching fast, and Grand Canyon National Park employees are already in the planning stages to make the event enjoyable for all.

Grand Canyon National Park's Earth Day celebrations are from April 18 to 20 and this year the theme is "Water Conservation." As part of the park's annual festivities, employees are inviting the public to take part in a recycled water bottle art exhibit at the Grand Canyon Visitor Center April 20. Artists are encouraged to contribute an art piece that is created with 75 percent recycled materials with a focus on water bottles. Because the park hopes to showcase its goal of a climate friendly park through the exhibit, organizers ask that the art projects consist of used water bottles. Buying bottles of water would negate the purpose.

"At first we were just talking about having it just opening it up to people in the park, but we have opened it to anyone who's interested," Hydrologist Cynthia Valle said.

Valle said artists will need to bring their pieces to the Grand Canyon Park Headquarters on April 18 between 10 a.m. and 2 p.m.

The submitted art pieces will be hung inside or outside the visitor center depending on space.

After experienced increasing amounts of litter associated with disposable plastic bottles along trails both on the rim and within the inner canyon, the Grand Canyon National Park banned the sale of bottled water in February 2012. The ban included the elimination of the sale of water packaged in individual disposable containers of less than one gallon, plastic bottles and various types of boxes. The waste associated with disposable bottles comprises an estimated 20 percent of the park's overall waste stream and 30 percent of the park's recyclables. To compensate, the park constructed free water stations to allow visitors to fill reusable water bottles.

More information about the art exhibit is available from Valle at Cynthia_Valle@nps.gov. or Green Team member Pamela Edwards at pamela_edwards@nps.gov.

Join in the fun

Grand Canyon's Green Team is putting on the weekend's free, fun and educational activities and is looking for 10 people from outside the park to participate in the open-house style event April 20. Interested individuals, organizations or businesses may contact Edwards at (928) 638-7713 to obtain an application. Interested parties must submit their applications by March 7. The Green Team will evaluate the submitted forms and will make final selections and notify all applicants by the end of March.

Grand Canyon's Green Team is made up of employees from various National Park Service divisions, park concessioners, and park partners collaboratively working to increase the awareness and level of environmental stewardship within the Grand Canyon community.