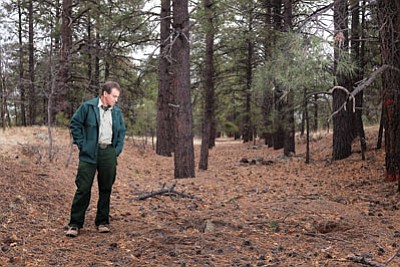 WILLIAMS, Ariz. - March is Archaeology Month, and the Kaibab National Forest has several free activities planned each week to mark the occasion.

This is the sixth year the Kaibab National Forest has organized weekly lectures and hikes during the month, according to South Kaibab Zone Archaeologist Neil Weintraub.

"Up in the northland March is often one of the stormier months. It's a little bit difficult to highlight archaeology when there's a lot of snow on the ground," Weintraub said. "And so we just started thinking, well you know what, we can still go to Keyhole Sink because you can see the petroglyphs and there's a waterfall there. And then we also started thinking, well we could also do presentations on different topics related to historic preservation."

"Every year we report on new finds and new discoveries," Weintraub said.

Weintraub will give the first lecture March 6 called "Exploring Abandoned Remnants of the 1882 Atlantic and Pacific Railroad." He'll discuss the abandoned sections of the transcontinental railroad grade located on the Williams Ranger District.

"It sort of ties into the railroading history of Williams," Weintraub said.

"We're trying to save that as a secret for folks that show up," Weintraub said.

Kaibab National Forest Heritage Program Manager Margaret Hangan will give the third lecture called "The History of Goats in Arizona" on March 20. She'll chronicle the history of the goat herding industry in the area.

"We never had time to get out there and actually locate things," Weintraub said. "So when forest users were going out and trying to use the old Beale Wagon Road, it was very difficult to find. Some of it goes through some very heavily wooded areas."

In addition to the lectures, archaeologists will also lead hikes to Keyhole Sink every Saturday in March. Those interested should meet at the Oak Hill Snow Play area, four miles west of Parks, Ariz. on the south side of Route 66, at 2 p.m.

"If people have never been to Keyhole Sink, one of the premier petroglyph sites in northern Arizona which is basically in folks' backyards, we want people to get out and be able to appreciate that," Weintraub said.

He encouraged hikers to bring boots and warm clothing, since the 1.5-mile roundtrip hike will take place regardless of weather conditions. Weintraub hopes the region gets some more winter weather so the waterfall will be flowing during the hikes.

"Keyhole Sink is one of the few really good pour offs that we have here on the forest other than Sycamore Falls," Weintraub said. "But the nice thing is we have the petroglyphs right next to the waterfall. So it's pretty special when we get a good spring storm."