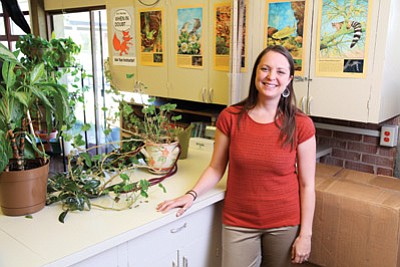 WILLIAMS, Ariz. - For the second year in a row, the Arizona Rural Schools Association has named a Williams High School (WHS) teacher as the Coconino County Rural Teacher of the Year.

"I am so proud that Rural Schools Association selected a Williams teacher now two years in a row for Coconino County," said Williams Unified School District Superintendent Rachel Savage. "I just cannot express how honored that makes me feel and happy that makes me feel, because sometimes smaller districts don't always get the attention they deserve."

Heisley found out she had been selected for the award a couple of weeks ago.

"I was pretty excited, kind of shocked and really honored," she said.

A committee chose the Arizona Rural Schools Association's county teachers of the year after considering the applicants' teaching experience, teaching philosophy, instructional methods, leadership qualities and classroom innovations. In August, Heisley and the rest of the county Rural Teacher of the Year winners will go to Phoenix for an interview process to determine the Arizona Rural Teacher of the Year.

Although teaching was never Heisley's original career choice, she has now been teaching for nine years, all of which have been in Williams.

"I was never going to be a teacher because both of my parents were teachers," she explained.

Heisley ended up earning a zoology and chemistry degree from Northern Arizona University.

"From there I didn't really know where I wanted to go or do," she said. "So I thought well maybe I'll just get certified in teaching, just in case."

At that time, she also got her master's in secondary education. Heisley ended up in Williams, where she's taught physical science, biology one and two, journalism, and the new dual enrollment environmental science class.

Besides her classroom responsibilities, Heisley is also active in extracurricular activities. She oversees the Green Club, a student sector of Williams Clean and Beautiful, serves as a class sponsor, and is the site sponsor for the Upward Bound program, which helps low income and first generation students work toward going to college. She also was the yearbook sponsor and was a chaperone for the Costa Rica trip last year.

One of Heisley's major accomplishments last year was securing two grants for WHS. The first was an $8,350 grant from the Arizona Game and Fish Department to turn the school's courtyard into an outdoor native habitat. The second was a $39,836 grant from Science Foundation Arizona and the Kemper and Ethel Marley Foundation in memory of Joyce Marley Corrigan, which will provide 50 iPads for students to use in their science classes.

Since Heisley's husband Tristan is the principal at WHS, Savage is her supervisor. Savage nominated Heisley for the award, citing her addition of the dual enrollment environmental science class, her new role as the science department chair and her success in acquiring grants.

"Jessica is a fantastic teacher. She's just had a rock star year, and we're lucky to have her," Savage said. "She doesn't get enough attention and recognition for the things that she does, and it's time that she is able to stand out under her own spotlight, because she deserves it."