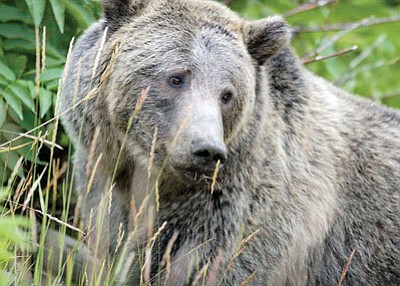 A grizzly bear in Yellowstone National Park. A conservation group has petitioned the Fish and Wildlife Service to consider reintroducing grizzlies in Arizona and other parts of the Southwest. Photo/Zach Hyman<br /><br /><!-- 1upcrlf2 -->

WASHINGTON - The Center for Biological Diversity last week petitioned the U.S. Fish and Wildlife Service to work to return grizzly bears to the Grand Canyon, the Gila/Mogollon complex and other areas of the Southwest.

The petition cited 110,000 square miles of potential bear habitat - in Arizona, New Mexico, the Sierra Nevada in California and Utah's Uinta Mountains - that could allow the introduction of as many as 4,000 grizzly bears in the West.

"This animal is very much revered," said Noah Greenwald, the center's endangered species director. "They are an iconic symbol of wilderness and our past."

At least one critic called the plan a waste of taxpayer dollars for a proposal that is "playing God."

But Greenwald said the U.S. Fish and Wildlife Service needs to revise its 1993 grizzly bear recovery plan, which he said is outdated.

Gavin Shire, a Fish and Wildlife Service spokesman, would only say that the agency has received the center's petition and is reviewing its content.

Greenwald said he expects to hear back from the agency within six months, but said that the overall process of reintroducing bears would be an ongoing one that could take years.

Greenwald said that fewer than than 2,000 grizzly bears exist today and they are confined to Montana, Idaho, Wyoming and Washington - about 4 percent of their historic range.

Reintroducing grizzlies to the greater Southwest would help increase the population of the threatened species. But it would also help regulate prey population and maintain the health of deer and elk herds, he said.

"By doing that they (grizzlies) benefit a lot of other species," Greenwald said.

He said the areas cited in the petition are mostly uninhabited, with few roads.

"I think the Gila/Mogollon area is one of the largest areas where there aren't currently bears, but could be," he said.

But Patrick Bray, executive vice president of the Arizona Cattle Growers' Association, does not see many positives to the center's petition.

Bray said reintroducing bears to Arizona would hurt the livestock industry, especially for ranchers near the Arizona and New Mexico border.

He also said the recovery plan would be a waste of taxpayer dollars, and called the center's action a "game" to "keep man off public lands."

"Humans should be really careful in playing God with these things," Bray said. "What is going to happen to the elk herd or other wildlife? Why is it that we need to play this game?"