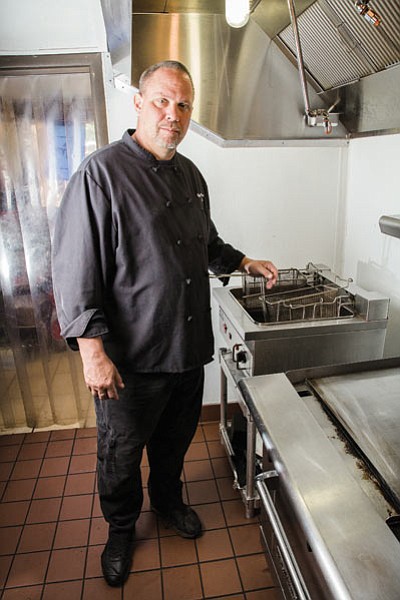 Walker started the job on May 1 after working as a chef for 35 years. His interest in becoming a chef came from his love of food.

"I ate a lot," he said. "I played football, basketball and ran track. When I got out of practice I would come home and just annihilate everything. My parents had two refrigerators and they literally put a lock on each one."

Since Walker's sister was a chef and a food writer, she encouraged him to pursue the profession.

"I started working with food and it's like meditating to me," he said. "You kind of lose yourself, you calm down."

Walker got his start in restaurants by working as a dishwasher in Nogales, where he was born. From there he moved to Flagstaff where he worked at the Northside restaurant, which is now the Sportman's Bar and Grill. After that he moved to Phoenix so that he could learn from the best chefs.

"Basically I slept out of my truck for six weeks just so I could work down there," he said. "I kind of popped around every two years and worked for whoever was considered the best in the Valley at the time."

After working his way up in the food world, Walker began opening restaurants for other people, including 1899 Bar and Grill in Flagstaff.

Walker's goal as a chef is to "put something out there that's delicious, tastes good and is inexpensive."

One of the things Walker enjoys the most about being a chef is building on the basics he's learned from other chefs.

"When you're an artist, if somebody gives you the foundation, they show you how to do something, but while they're showing you how to do it, you're already thinking of how to do it better or different," he said.

For example, the hamburger on the menu at Elephant Rocks is not just a basic hamburger. It's half beef and half bacon, sautéed with garlic, onions and mushrooms, reduced in beer, and served on a pretzel roll with jicama.

"You can just kind of play with stuff and take old classics and then you twist them up, you make it different, you make it your own," Walker said.

Walker is a married father of five who lives in Flagstaff. He said he is enjoying using his creativity in the Elephant Rocks kitchen.

"I told my kids if you find something you enjoy doing and then you figure out a way to make money at it, you'll never work a day in your life," he said. "I'm actually probably having more fun here than I have in a long time. If it's not fun it's not worth doing."