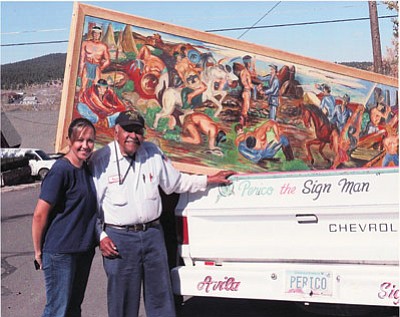 WILLIAMS, Ariz. - In 1951, two Williams High School students created a large painting of a battle scene. Since that time, the painting has hung in several different places around town. Recently however, the painting has found a permanent home, thanks to the efforts of Williams resident Fred "Perico" Avila.

Frank Yarbrough and Reynaldo Manrriquez completed the 10-foot by 3-foot painting in their art class during their senior year. Avila, who was a sophomore at the time, was in the same art class.

"I remember them working every period," Avila said. "It probably took them the whole senior year to paint it."

"I went the next morning and sure enough they were going to throw it away," he said. "When I went and saw it I said, 'Oh my god, those are my buddies. We took art together when they painted that and I was there in the same class.'"

Avila rescued the painting and took it to the American Legion Cordova Post 13 for safekeeping while he tried to track down Yarbrough or Manrriquez or their family members.

Eventually Avila found out that Manrriquez had died at a young age. However, when Yarbrough's son came to town to do electrical work for the new Safeway store, Avila was able to reconnect with Yarbrough.

"Well I hadn't seen this guy since 1951. We lost track of each other," Avila said. "He came and took pictures of it at the Legion over there with me. He was glad to see his painting and that I had saved it and all that."

When Yarbrough passed away a few years ago, Avila continued searching for the artists' family members. Through his job with the Forest Service, Avila met a man who was related to Manrriquez's only living sister who lived in Flagstaff. The sister, Lillian Lopez, said she would take the painting, but when she realized how big it was, she told Avila she didn't have room for it.

"How this story got all tangled up and came out to all the missing links, she's married to Ruben Lopez and this Lillian Lopez was his grandma," Avila said.

So since November, the painting has been hanging in the Lopez's home. Avila wanted any other family members of the two artists to know where the painting ended up.

"There's got to be some other relations in the Yarbrough family that would like to see the painting and maybe never have seen it," he said.

But for now, Avila is pleased to know that the painting is in the Manrriquez family.