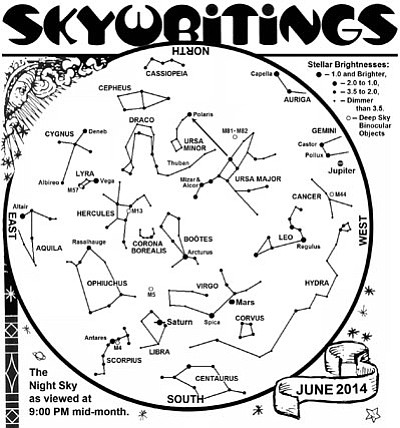 Saturn, the second largest planet in the solar system, is now easily visible in the evening sky and throughout the summer in the constellation Libra. To the pre-telescopic ancients it was the last of the planets in a system of celestial objects thought to orbit the Earth. Saturn is remarkable in its system of rings, once thought to be unique in the solar system until both Uranus and Jupiter were also found to support minor ring structures. Saturn is the second largest of the four gas giants, all of which have opaque atmospheres that obscure the planets' surface. As viewed from Earth, Saturn has a predominately yellow-gray banded atmosphere with its polar regions appearing bluish-green in hue.

Because the ringed planet is composed largely of gases, its density is less than any other planet. In fact, its density is less than water. So if one could find a tub large enough, it would float. Due to its great distance from the Sun, Saturn is also extremely cold, about -140 °C (-220 °F). Scientists believe that the planet's interior is composed primarily of a relatively small core of rock and metals overlaid by a thick atmosphere of hydrogen, helium and various ices such as methane and ammonia. Due to its large size, the escape velocity is greater than three times that of Earth, so the lighter gas elements, such as hydrogen and helium, have not been able to escape as they have on Earth.

Prior to the invention of the telescope, no one knew the physical characteristics of any of the planets. In 1610 Galileo first made notes concerning the appearance of Saturn, and he noticed a peculiarity when compared with the other planets. But, due to the imperfect optics of the day, and low magnification, he was unable to determine the true form of the rings. Theories were developed that supposed Saturn to be a triple planet, an ellipse with holes in it, or having "ear-like" appendages. And another puzzling observation was that every few years the "ears" would disappear. It wasn't until 1655, with the improvement of telescope optics, that Christian Huyghens determined their actual shape and that their disappearance was due to their edge-on view as seen from Earth. However, it would take more than two centuries, with the invention of the spectrograph, to prove that the physical make-up of the rings were not solid, but consisted of small particles in orbit around the planet.

Even before the 20th century the possibility of life existing on other worlds was discussed in scientific circles. Extra terrestrial life was sometimes considered a "given" since, for what other purpose would the Creator have made these other worlds but to be populated by living creatures. Saturn has many orbiting moons (62 to date) though only about seven can be easily viewed from Earth through telescopes. The largest of these satellites is Titan, and the first to have its own detectable atmosphere. Titan is now one of the few locations left in the solar system to which, scientists believe, life in some form may be possible.

Members of the Coconino Astronomical Society, in conjunction with the City of Williams, will host a Star Gazing Party from 7:30 to 9:30 p.m. on Friday, June 6, at Glassburn Park, in the natural area west of Rod's Steakhouse. Several large telescopes will be on hand to view the moon, planets and other celestial objects. Organizers recommend bringing a folding chair or blanket and binoculars.