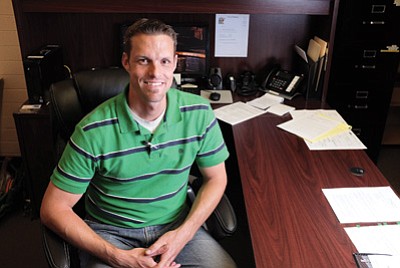 WILLIAMS, Ariz. - For the first time since 2011, the city of Williams has a public works director again.

Kyle Christiansen started the job about six weeks ago. Before starting his job with the city, Christiansen worked as a project manager for a commercial general contractor.

"As development and related projects return, this position will be critical in transitioning operations from a maintenance mindset to a progress-oriented one," he wrote.

As the public works director, Christiansen oversees water, wastewater, distribution, collection, the airport, sanitation, maintenance, streets and the central garage. Christiansen said his responsibilities include checking in with each department on a daily basis, addressing the needs of each department, helping manage the personnel and attending several meetings.

One of Christiansen's primary goals as the public works director is to be more proactive.

"Sometimes we feel like the city is always reactive, and one of the goals is to get things where they're proactive," he said.

For example, Christiansen said staff is trying to be proactive when dealing with the city's water crisis.

While the city's water supply is a major focus right now for Christiansen, he said the streets are also a priority for him.

"And that rolls back to water, because if we're going to fix the streets we have to fix the water lines," he said. "So right now it's all water."

In managing different city projects, Christiansen hopes to find the middle ground between dealing with the needs of the community and the needs of tourists.

"As a resident of the community sometimes I have felt personally where it seems like the tourists are being addressed more than the residents," he said. "And there is a balance there because we need that revenue but we also need to have the balance of what the city needs."

Christiansen has lived in Williams for nine years and is enjoying not having to commute to work on projects in other cities anymore.

"When you're in construction, especially being on the road a lot like I was, you get home at 8:30 p.m. sometimes and the kids are already in bed," he said. "I've been to more baseball practices and baseball games it seems like in the last five weeks than the last like five years. It's been great. That's the big change is being able to be here for my family."