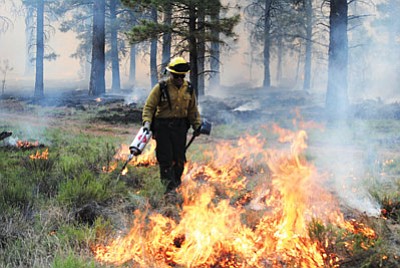 WILLIAMS, Ariz. - After nearly 100 years without any fire activity on Sitgreaves Mountain, the lightning-caused Sitgreaves Complex fire is accomplishing some much-needed fuel clean up about five miles northwest of Parks.

"So we have 98 years worth of fuel buildup on that mountain," she said. "The historic fire regime for ponderosa pine fuel type is every two to 12 years. So because that mountain has missed its fire regime for more than eight cycles, if you go to the long end, you have an absolutely dangerous potential to lose that entire mountain and have it be black toothpicks from high intensity, high severity wildfire if we don't treat it with fire now."

As of press time, the Sitgreaves Complex fire was 4,040 acres in size. Last week it was averaging about 448 acres of growth per day. Although the monsoonal rains in recent days have slowed growth, drier conditions are expected to return midweek. Fire managers carried out aerial ignitions last week near the peak of the mountain, and the fire is now moving down slope toward the southwest.

"Fire moves very slowly and with low to moderate intensity down slope. So that gives us the fire effects that we want that clean out almost 100 years worth of fuel buildup on the mountain without leading to the high intensity stand replacing type of wildfires that you see during the extreme fire season when fires race uphill," Krake said. "So by dropping fire at the top of the mountain we can back it slowly down with much more control and accuracy."

"When you complex a fire, what that does is it puts it under one management organization structure called the incident command system," Krake said. "It streamlines resources such as engines, firefighters, operations, what plans we're going to be doing that day, information to the public."

The Forest Service has mapped out a planning area of about 19,600 acres for the Sitgreaves Complex. Staff is managing the fire by monitoring the fuel moistures, upcoming weather patterns, fire effects, wind direction and fuel types. About 106 personnel are involved with the fire.

Krake expects the Sitgreaves Complex to continue burning for another two to three weeks.

"It's a long term investment in saving the mountain," she said. "We can't save it in a day or two and remove 98 years worth of fuel in a few days. Two or three weeks of smoke impacts are a pretty good tradeoff, one to save the mountain, and two to protect it for probably the next 25 to 30 years of fuel buildup."