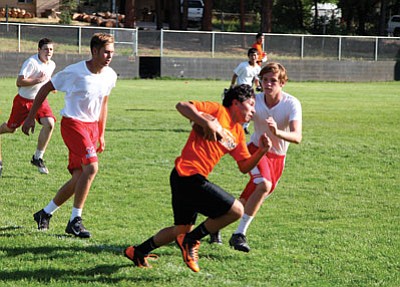 WILLIAMS, Ariz. - After a strong finish last season, the Williams High School (WHS) Vikings football team is hoping to continue that forward momentum into this season.

"We have a good program and we just keep building on the program," he said.

"The camp's really good due to the fact that they work on your skills at different positions and they do a lot of team stuff and then a lot of obviously conditioning," Brownlee said.

Besides participating in football camp, team members also prepared for the upcoming season by taking part in a seven-on-seven passing league at the start of June.

"We have a center and a quarterback, and then we have five receivers," Brownlee explained. "And then we go against seven of their people, which would be linebackers, cornerbacks and a couple safeties. So it's not a run game practice it's just throwing the ball, which helps develop the passing game."

Once official practice starts, Brownlee hopes to have about 40 players come out for the team this year, including about 11 seniors.

The Vikings will have to adapt to losing two key seniors who graduated last year: Joaquin Salaz and Kohl Nixon.

"Every year you think, 'How are we going to replace those?'" Brownlee said. "But you'd be surprised. Another year of maturity and another year of kids in the weight room, well they fill in just fine."

Besides the graduating seniors, the Vikings lost another key player, Aidan Grantham, after he transferred to Ohio. However, the Vikes also gained a player, quarterback Kyle Ernst, who transferred to Williams from Flagstaff High School.

Brownlee said some of this year's key players will be Leo Lopez for his strength and maturity, Kristian Holmes for his speed and athleticism, Damon Alvarado for his powerful north-south running, and Christian Plascencia and Isaac Brandt for their experience in anchoring the offensive line. Brownlee is also confident that several juniors and sophomores will step up to fill other key positions.

Another key addition this season is Tanner Grantham, who will serve as the team's assistant coach.

"He has a great rapport with the kids, is very knowledgeable about the game of football and he will just definitely be an asset to the team," Brownlee said.

On offense, the coaches will run a Wing-T offense with a spread concept.

"It's a great misdirection offense," Brownlee said. "It helps our linemen because...instead of just going straight up one on one, because we don't always have the biggest kids, we do a lot of angle blocking."

Instead of running a 4-3 defense like the team normally does, this season the Vikes will run a 4-4 defense, which will allow them to show different looks.

Brownlee predicts the team will finish 8-2 this season, with Eager's Round Valley, Glendale's Joy Christian and Kingman's Lee Williams being the toughest matchups.

The Vikings will have their first scrimmage Aug. 22 at home against Scottsdale Christian. Their first game is on Aug. 30 against California's Needles High School at the Northern Arizona University Skydome.

"This year is going to be a fun year," Brownlee said. "I'm real excited."