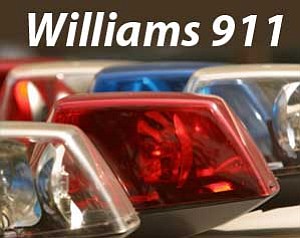 WILLIAMS, Ariz. - A one vehicle roll over accident that took place July 21 around 5:25 p.m. on Drake Road near the Bar Heart Ranch headquarters killed one person.

Two people were in the vehicle; the driver and a front seat passenger. Investigators think 32-year-old Rocky Deibler of Williams, Arizona was ejected from the vehicle as it rolled over. The investigators also believe consumption of alcohol or other substances may have played a role in the accident.

Deputies believe the vehicle was traveling fast as it crested the hill just to the east of the Bar Heart Ranch. The driver likely began to lose control as the vehicle reached the bottom of the hill and slid across both lanes of traffic.

The driver hit a large rock on the shoulder of the road and the vehicle eventually rolled over once completely and then flipped end over end one time. Deputies believe Deibler was ejected at the beginning of the roll landing about 20 feet from where he left the vehicle resulting in severe head trauma.

The deceased victim was taken to the office of the Coconino County Medical Examiner for further examination and investigation.

Investigators are attempting to determine which of the two occupants was driving at the time of the collision. No enforcement action has been taken at this time.