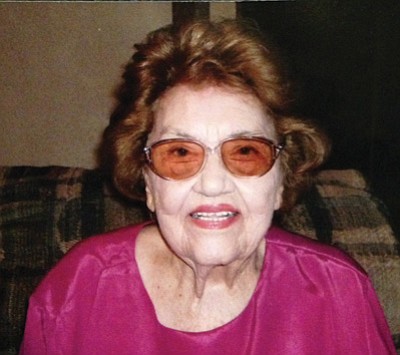 Roxie Ann Carson Trietsch, formerly of California and Sanger, Texas (retired) departed this life on July 13, 2014. "Annie" or "Grannie Annie," as she was known to those who loved her, born Oct. 4, 1920, was one of 12 children born to John and Edna Carson on Indian Territory in Pottawatomie County, Oklahoma. Annie is survived by only one sibling, Francis Louise Retzlaff and husband, Harold (Ret. Master Gunnery Sgt. USMC) of San Jacinto, California.

In 1941 Annie married Arthur W. McCaffrey ("Ott") in Ventura, California and had two children who survive her, Arthur McCaffrey and his wife, Sammie, of Bowie, Texas, and JoAnn Duda, and her late husband, Gary Joseph Duda of California

Annie married Herman E. Trietsch in 1962 and together, with a lot of hard work and determination, they built what was to become Herman's Gradall Rental, and traveled many states with extended family in tow to build their legacy. They retired in 1989, leaving their business in the capable hands of son in-law Gary and daughter JoAnn to continue on.

Their retirement afforded them a ranch life and more business opportunities in Sanger, Texas until she became the widow of Herman in 1998. Much of the family followed them to be close in Texas, where many memories were made over the years. She will be missed by those who knew and loved her as the tenacious and sassy, can-do "Annie."

A Celebration of Life Memorial in Denton, Texas is being planned for a later date for friends and family to make travel arrangements.