Echoes from the Canyon returns to McKee Amphitheater this summer 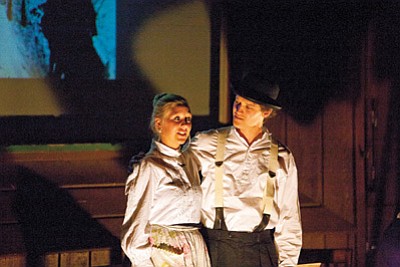 Grand Canyon rangers perform for a full house during a recent production of “Echoes from the Canyon” at McKee Ampitheater at the Grand Canyon.Photo/NPS

GRAND CANYON, Ariz. - Grand Canyon National Park invites the public to the third season of its living history event, "Echoes from the Canyon." The event will take place over three Saturdays in place of the nightly evening program at McKee Amphitheater this summer.

Visitors can watch historical figures from Grand Canyon's past come to life with stories about their families, adventures, discoveries, and efforts to survive in this remote location on the following Saturdays July 26 at 8:30 p.m. and August 9 and 30 at 8 p.m.

Native American tribes inhabited the landscape in and around Grand Canyon for thousands of years before the first explorers arrived 145 years ago. After the first explorers saw the majesty of the Canyon, word spread, and people have been coming to see it for themselves ever since. Some of those first explorers stayed to mine the Canyon and reap its rewards, while others documented its beauty. Entrepreneurs soon learned that it was easier to mine the pockets of tourists than the Canyon, and soon, a few realized that even this rugged environment needed protecting from ourselves.

The public is invited to come and watch as park rangers get into costume and become nine influential characters from Grand Canyon's past.

"It has been great fun putting on this production for the public. The rangers work hard to bring a little bit of fun into learning the canyon's history," said Erin Whittaker, the show's director. "We hope you can attend one of these special nights and hear their stories."

Additional information about the program is available on the park website at www.nps.gov/grca/planyourvisit/echoes-from-canyon.htm.