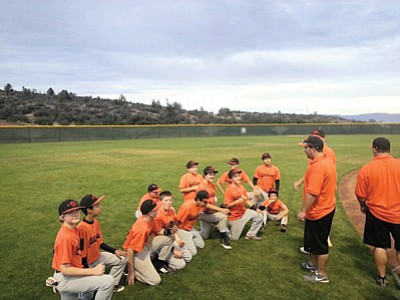 WILLIAMS, Ariz. - Williams All Stars went all the way to the 11-12 year-old District 10 Little League Championship Game on July 14, but fell short to Prescott.

Even though they lost, the boys held their heads up high with dignity, and never gave up until the last out.

"The Williams team has a very sound defense, and we knew going into it that we were going to have to play hard and get our bats working. I tip my hat to Williams, they are a fun team to watch, coached well, and have a lot of talent," Prescott Coach Josh Gross said after the game.

For a considerably smaller city than Prescott, a huge crowd from Williams was on hand to support their boys in orange. District 10 representatives were amazed by Williams' spirit and turnout. One Prescott Little League board member asked the team if they "closed the city" since everyone was there at the game. Cami Grantham was even given a home run pin, because as organizers put it, "her cheering knocked it out of the park."

The tournament started June 30 with a total of six games. The Williams Little League team played three straight days of games, with three straight wins against Bagdad, Camp Verde and Wickenburg. With two days of rest, they played July 5 with their first lost to Prescott. Then it was on to Verde Valley for a close game, and an awesome win by our boys.

"Verde Valley underestimated these boys who showed they will never give up. That determination and coaching got them to the championship game," parent Cynthia Sutton said. "We wish Prescott LL the best of luck representing our District 10 in Peoria for the State Tournament starting July 15."