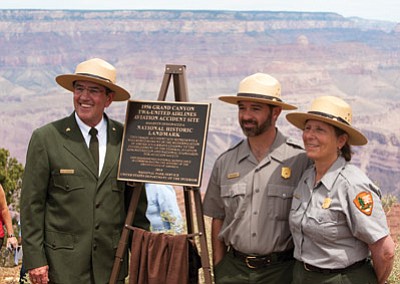 The site commemorates a horrific airline collision over the Grand Canyon in 1956, when a Trans World Airlines (TWA) Super Constellation L-1049 and a United Airlines DC-7 collided in uncongested airspace 21,000 feet over the Grand Canyon, killing all 128 people onboard the two flights. The tragedy spurred an unprecedented effort to modernize and increase safety in America's postwar airways, culminating in the establishment of the modern Federal Aviation Administration.

The public dedication ceremony of the National Historic Landmark designation took place at the Desert View Amphitheater looking out toward the crash site. This ceremony remembered those who perished in the crash, recognized the significance of the accident, and acknowledged family and friends of the crash victims.

Established in 1935, the National Historic Landmarks Program is administered by the National Park Service on behalf of the Secretary of the Interior. The agency works with preservation officials, private property owners and other partners interested in nominating properties for National Historic Landmark designation. Completed nominations are reviewed by the National Park System Advisory Board, which makes recommendations for designation to the Secretary of the Interior.

The week prior, the park commemorated the 58th anniversary of the midair collision by scheduling simultaneous wreath laying ceremonies at the United Airlines Memorial in Grand Canyon Pioneer Cemetery, and at the TWA Memorial in the Flagstaff Citizens Cemetery. Visitors to the park were able to participate in a series of interpretive programs about the collision at Desert View throughout the day on June 30 and were invited to attend an evening program by archaeologist Ian Hough.