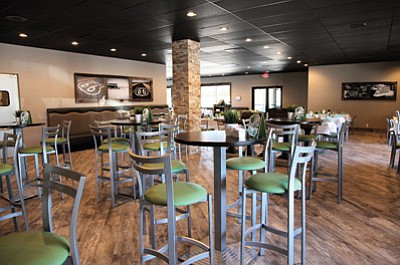 The owners of the old Denny’s restaurant on Clover Hill in Williams recently transformed the eatery into Kicks on Route 66. Ryan Williams/WGCN

WILLIAMS, Ariz. - What used to be the Denny's restaurant on Clover Hill recently reopened as Kicks on Route 66 Bar and Grille.

After a soft opening on June 18 and 19, the restaurant's grand opening was June 20.

Brad and Sally Olson owned the Denny's and are now the owners of Kicks on Route 66.

"We were at the end of our franchise with Denny's and we made a family decision to do something else," Brad Olson said. "We wanted to do something that was unique and trendy, and right now the trend is everything fresh."

Everything on the menu is made from scratch daily, such as the breads, rolls and sauces.

Kicks on Route 66 has 20 beers on tap, 16 of which are Arizona craft beers. The restaurant also has four Arizona wines on tap as well as an extended selection of bottled wines.

"We already had the liquor license so we felt like if we expanded the bar and remodeled the bar we could really do a lot more bar business as well," Olson said.

With multiple televisions, the Olsons hope the restaurant will be a place for locals to watch sporting events.

The Olsons closed Denny's at the end of March and started remodeling the building at the beginning of April.

"The décor is kind of a urban chic look," Olson said. "So what we did was kind of a combination of rustic with touches of modern flair."

Wood accents in the restaurant came from a barn the family owned on Garland Prairie Road. Photographs of Route 66 are also part of the décor.