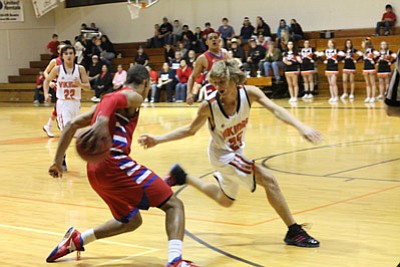 Justin Jarrell's defense helped lead to some easy offense as six first quarter steals by the senior guard helped lead to a 26-6 advantage after the first period.

Transition dunks by Tyler Jones and Joey Bankston coupled with three Ethan Berry three-pointers and a pair of alley-oop Bankston dunks, assisted by junior Alex Thompson, helped Grand Canyon end the first half in complete control with a 54-15 advantage.

With a running clock in the second half, the offensive fireworks slowed and the Phantoms cruised to a 75-25 victory.

Bankston scored 17 points, Berry and Tyler Jones had 14 each, and senior Ethan Jones scored 11. Grand Canyon had 10 of its 11 players get on the scoreboard.

The next day, the Phantoms traveled to play former sectional rival the Williams Vikings.

The Vikes excited its home crowd by coming out aggressively and jumping out to an early 14 point lead and led 20-9 after the first quarter.

Grand Canyon, plagued by turnovers and poor shot selection in the first half, trailed 33-23 at the half. In the second half, the Phantom's offense came to life as Grand Canyon out scored Williams 20-14 in the third and trailed 47-43 heading into the fourth quarter.

The teams traded baskets and stops for most of the fourth period as GC cut into the lead, only to watch the Vikings push it back three or four points.

Finally, with just 1:20 remaining, Grand Canyon seized its first lead of the game at 58-57 on a Bankston three-pointer from the top of the key. Williams would not score again, as key free throws by Ethan Berry and a Jaru Velazquez basket helped the Phantoms to a 66-57 victory.

"We struggled to stop penetration from their point guard Colton Grantham in the first half and he really facilitated their offense," head coach Dave Beery said. "In the second half we were much better defensively and were more patient and intelligent on offense. Jones played very steady in the second half, Joey finally got going, and Berry and Jarrell play superb perimeter defense at the end of the game."

The win is the ninth in a row for the Phantoms who are now 15-7 for the season overall. Bankston led the Phantoms, shooting 8-10 in the second half after failing to convert from the field in the first half. Bankston scored 21 points and was aided by 15 from Berry, 13 from Jones, and 11 from Jarrell. Jarrell led the team in rebounding with 10, and Bankston and Jones each grabbed nine boards.

Grand Canyon boys played host to the Rock Point Cougars on Monday. On Friday they take on Red Valley-Cove at 5 p.m., and will travel to play Chino Valley on Saturday at 5:30 p.m.

After playing Shonto Prep yesterday, the girls will match up against Red Valley-Cove on Friday at 3:30 p.m. The next day they travel to Chino Valley. The game starts at 4 p.m.