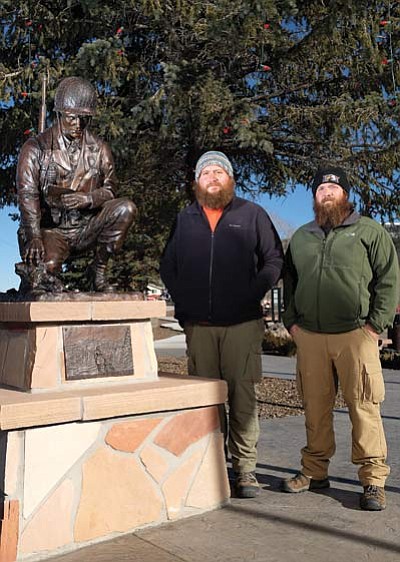 Throughout their 2,700-mile walk across the country, Tom Voss and Anthony Anderson are hoping to help other veterans, and to help themselves as well.

The two Iraq veterans started walking from Milwaukee to Los Angeles on Aug. 30 to raise money for the nonprofit veterans' organization Dryhootch and to raise awareness about veterans' issues. Along the way Voss and Anderson are also doing some personal healing.

Voss and Anderson passed through Williams on Dec. 30. The Matthew James Broehm Veterans of Foreign Wars Post 12128 paid for the two to stay in a hotel overnight before they continued on their journey.

Voss first came up with the idea to do the walk last year.

"I was planning on going by myself in the beginning but it evolved into something much much bigger," he said. "So I'm happy with how it turned out so far."

Anderson got involved when Voss called to ask to borrow a rucksack.

"He was planning on taking some time that he never took when he got out of the military and came home from Iraq to just kind of sort through some stuff and I said, 'I feel like I'm in the same boat, do you mind if I come with?'" Anderson said.

Voss and Anderson met about two years ago working at Dryhootch. The nonprofit provides peer-to-peer support groups for veterans and their families and an informal place to talk to other veterans.

"They don't have clinicians on staff, it's veterans helping veterans," Anderson said. "Everything is centered around a coffee shop so it's a completely safe sober environment. So people can come around and re-experience camaraderie, they can speak the same jargon and be understood, they can come and visit one-on-one."

Besides the fundraising, awareness is another important part of the walk. Voss said the veteran community faces several issues, including post-traumatic stress disorder and homelessness. He added that 22 veterans commit suicide each day.

Anderson said he hoped the trip would inspire other veterans to seek help if they are struggling.

Now more than four months after they started the walk, Voss and Anderson are in the final leg of their journey. The two walk about 16-20 miles each day. So far their trip has taken them through Wisconsin, Iowa, Nebraska, Colorado, and New Mexico before passing through Arizona on their way to California. The two have crossed mountains and the Mississippi and Missouri rivers. Their final obstacle is the Mojave Desert.

Voss and Anderson expect to reach Los Angeles at the end of this month or at the beginning of February. At that point they'll rent a car and drive home.

Several people have followed Voss and Anderson's journey through their website or social media and have helped them along the way. People have offered the two meals, places to stay, and rides to and from where they stop walking for the day.

The trip has been beneficial to Voss and Anderson in several ways.

"Both Anthony and I had kind of trust issues at the beginning of this just from our deployment and being involved in Iraq," Voss said. "But through this trip we've been able to really appreciate the kindness of people that have supported us along the way. I never would have imagined the support we've received."

For Anderson, the journey has given him an opportunity to reflect on his roles as a husband and a dad.

"Having all this time to walk, you just think about the different maybe ways that you've succeeded or ways you've failed, things you want to improve upon," he said.

Anderson added that the walking has allowed him to do some "personal healing, just kind of finding a place of peace with yourself."

However, the stories from the people Anderson has met throughout the trip have had the biggest impact on him.

"I'll take away all the different perspectives that were shared on the veteran experience, coming home, trying to deal with the number of issues that you deal with when you come home," he said. "I don't feel so isolated anymore. I feel like when I came home I basically just kept to myself. Now I've forced myself back out into the world."