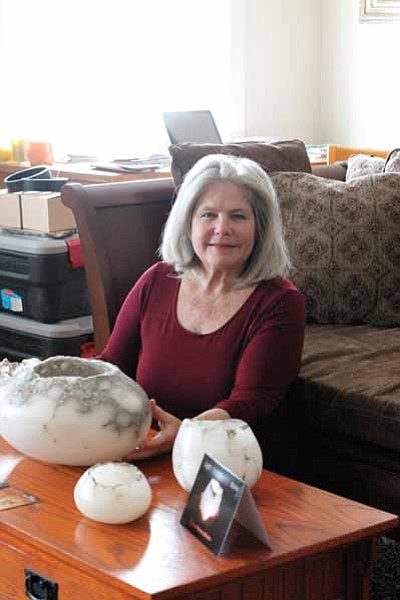 GRAND CANYON, Ariz. - If art does indeed imitate life, then Susan Zalkind is like a living translation. The stone carver's presence embodies her medium: incandescent, strong and dynamic.

For 37 years Zalkind and her husband, Paul Hawkins, transformed alabaster, a mineral malleable enough to coax out of its primitive state and into work of unparalleled beauty. Together, they have scoured the Southwest, through eight states and 11 different deposits, and discovered a variety of alabasters they then carted back to their studio in Camp Verde to reshape into pearly works of art.

South Rim Artist in Residence Coordinator Rene Westbrook described the couple as "true working artists," the kind of people who center their existence on their art. After meeting them at a Flagstaff art fair, Westbrook invited them to a two-week residency at the Canyon. While staying at the South Rim, they planned to exhibit their pieces, work outdoors "plein air" style and share their craft with Grand Canyon School students.

"So we were going to set up at a table out there on the South Rim and then they were just going to carve away and people could stop and talk to them," Westbrook said.

But suddenly, around the same time they were supposed to prepare for their residency, Hawkins' health started to decline.

Zalkind packed their equipment and waited for Hawkins to recover enough to make the trip up north. But, tragically, that day never came. On Sept. 17, Hawkins died of stomach cancer.

The couple's shared passion was alabaster, and now Zalkind is forging ahead on her craft alone, her grief assuaged with the help of her friends and family.

In December, Zalkind stayed at the South Rim for a week. She didn't bring any carving tools, instead the visit served as more of a retreat. A time to read, meditate and do yoga.

"Looking down the road, we hope she will come back and do the whole three week residency," Westbrook said. "But until then, I wanted to give her the opportunity to just 'be' for a week."

Looking back to when she and her husband first started out in the 70s, Zalkind said initially, they focused their energies on functional pieces like bowls and containers, which they sold at the Leucadia Flea Market near Encinitas, Calif.

In 1980, Zalkind attended a Paramahansa Yogananda spiritual retreat center in Los Angeles. There, while admiring tiny flowers scattered around the center's grounds, she discovered a new way to work with alabaster.

"Alabaster is the only material that is soft enough to carve flowers and nothing describes flowers like alabaster, it's soft and translucent and colorful," she said.

But Zalkind's alabaster journey didn't stop there. Her husband bet her that she couldn't carve a rose and she proved him wrong, making her the first person to ever successfully attempt it.

Zalkind has carved 20 roses since then, and they continue to be her biggest challenge.

"They take two or three years each to carve," she said. "They're spectacular pieces and as rare as hen's teeth."

Her alabaster roses are so intricate and time consuming, the last one Zalkind created she sold for $75,000.

But her most popular piece continues to be "The Eternal Light," fiery red-orange orbs suspended in the arches of Jewish Community of Sedona and Verde Valley Synagogue. It's a piece Zalkind said everyone she's spoken with loves and admires.

In between her bigger projects, Zalkind carves candle bowls of various shapes, sizes and colors. Each one starts out as a rounded nodule, its exterior rough to the touch, that Zalkind morphs into a vessel that bears an uncanny resemblance to a dinosaur egg. The end product is an object she says has a flowing nature, and invites touching.

"I call it petrified water," Zalkind said. "It's soft, it's translucent, and there's a flowing nature to it. And that's what our work is about. It invites touching, it brings out the beauty of the stone, these pieces turn to magic at night with a votive candle inside, that's why I carve them."

Zalkind discovered the alabaster for her candle bowls northeast of Tucson. The untouched stones were identical to the kind found in Volterra, Italy, a city famous for its alabaster workmanship, dating back to Etruscan times.

"Finding these, what I found to be treasures, and revealing the beauty of the stone, it's like, 'wow,'" Zalkind said. "It's like developing a photograph in a darkroom."

More information about Zalkind's and Hawkins' work can be found by visiting www.alabaster.net.