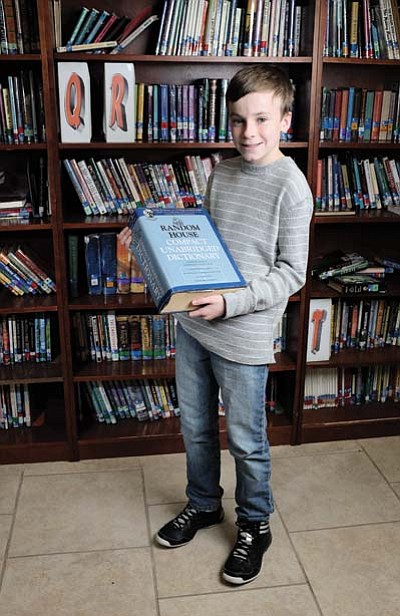 "It went kind of faster than I expected and I just kind of knew all the words because I'd been studying. And I didn't like all of the faces that I knew out there," Heap said, adding that the familiar faces in the audience made him nervous.

Heap got involved in the school spelling bees after seeing his older siblings compete in them. His older brother Braden won the local bee six years in a row, and his sister Rylie won last year.

Heap prepared for the local spelling bee by studying a word list on the bus ride to school.

For the county bee, Heap had even more words to study.

"The words are longer and more tricky," he said.

Heap also studied the origins of the words for the county competition.

"Sometimes with the Japanese and German words it helps," he said.

So what's Heap's strategy for learning how to spell so many words?

"Once I get one wrong when I have someone read it to me, I just say it right a few more times so it stays in my head that way, not how I spelled it wrong," he said.

This year wasn't Heap's first trip to the Coconino County Spelling Bee. He also qualified for the competition two years ago.

"I wasn't expecting to do as well because I'd been there two years before and it was really hard," he said. "I got out pretty quick (in 2012) but I was just so nervous because it was my first time."

About 21 students competed in the Coconino County Spelling Bee this year. Heap said he was pleasantly surprised with his third place finish. This time around he advanced to the eighth or ninth round and was less nervous.

Heap received a check for $100 for winning third place.

With a top three finish under his belt, Heap's spelling bee days are far from over.