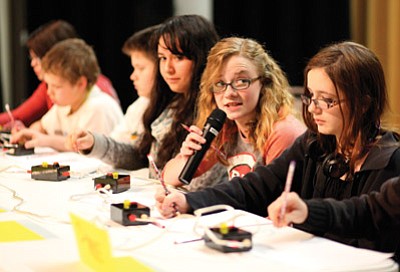 Rylie Heap answers a question during the math portion of the Knowledge Bowl. Heap finished second in the math competition. Ryan Williams/WGCN

The competition quizzes high achieving eighth graders on their math and civics knowledge in a game show format.

"Anything that they have learned so far in their eighth grade year is fair game," said math teacher and organizer Karen Macks.

Teachers chose the participants based on grades and also asked for volunteers.

"We like to pick the higher achievers because this is really a contest of the most knowledgeable," Macks said.

About a month before the Knowledge Bowl, teachers gave the participants study guides to prepare.

At the event, the students hit a buzzer for the chance to answer a question. At the end of the two competitions, the three students with the most points won prizes.

"There's a lot of things that we do for athletes and cheerleaders and things like that, but we don't often focus or spotlight those individuals that are high achievers and very good at their academic subject and do well academically," Macks said. "And this is a good way to promote the academics and how important it is to be a strong leader academically as well as a strong leader athletically."

The Knowledge Bowl kicked off with the math portion of the competition. Students answered math vocabulary questions and had 30 seconds to solve computations.

At the end of the competition, Arianna Foley finished in first place, Rylie Heap finished in second place and Kyler Edens finished in third place.

Foley goes to the high school for math class, where she takes geometry. She said math is her favorite subject.

"I like how numbers are all the same," she said.

Heap is in algebra and Edens is in prealgebra.

"I went to the last year's Knowledge Bowl and I thought it was really cool because they went really fast," Edens said of his decision to participate this year.

The students prepared for the competition for about a month by looking over their study guides. Answering the questions on the stage of the auditorium in front of their classmates added pressure.

"I get really nervous and then they have the spotlight and everything too," Heap said.

"I was shaking a lot and I didn't think I would be able to press the button fast enough," she said.

But the students kept their composure to finish in the top three.

"This was my first medal so that was pretty awesome," Edens said.

The Knowledge Bowl wrapped up with the civics portion of the competition. Students answered vocabulary and factual questions about how government works.

"I just like to know anything about history," he said.

Tully called finishing in the top three "super awesome," adding that being onstage was only intimidating at the beginning.

"It gets nervous at first and when you get used to it it gets really exciting," he said.

Rico said she enjoyed participating in the competition and was happy with her second place finish.

"It's pretty amazing," she said.

Gonzalez said he was just participating in the Knowledge Bowl for fun and was pleased with his win.