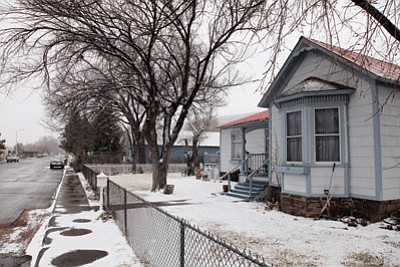 After one of the longest winter dry spells on record, northern Arizona received trace amounts of snowfall on Jan. 30 to end the streak.

The dry spell started on Dec. 22 and lasted 39 days, tying the record for the longest winter dry spell set with another 39-day streak starting Dec. 1, 1917.

"We have other times of the year that it's more common to go long stretches, but during the wintertime it's pretty unusual to go over a month without measurable precipitation," said Megan Schwitzer, a meteorologist with the National Weather Service in Bellemont.

A large ridge of high pressure positioned over the West Coast caused the dry spell.

"The ridge was strong enough that any system coming out of the Pacific couldn't really penetrate the ridge, just kind of ride up and over, and so it was just really a blocking mechanism," Schwitzer said.

"When we have such dry conditions, it's really easy for the atmosphere to radiate heat at night, and so when we see the largest temperature swings from low temperature to high temperature, it's during really dry weather," Schwitzer said.

As of press time, snowfall to date for the season in Flagstaff was at 31.6 inches, compared to 53.9 inches for a normal season to date.

"Had it been a normal January we probably would have been okay, but having nothing puts us quite behind," Schwitzer said.

Based on data from other dry spell years, Schwitzer said the lack of precipitation did not necessarily predict a pattern for the rest of the season.

"It really wasn't an indication as to what the following months would look like," she said. "A few good storms could help us get closer to normal and it maybe won't have as much of an impact on fire season and things like that."

As of press time, forecasters predicted a 60-70 percent chance of snow for Friday.