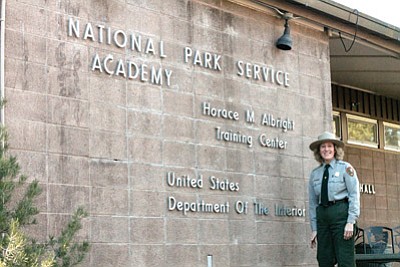 The single story center and dormitories was listed on Sept. 30, 2013 under criteria for architecture, education, community planning and development. The building is also an example of the funding and construction strategy of the Mission 66 era.

Albright's 14th superintendent, Laura Rotegard said that whenever a building approaching 50 years, or a complex of buildings like Albright, the question is raised about how valuable it is for telling a story about our country and our culture.

To be designated as a historic building, the process starts with the Park Service, which creates a nomination package for the State Historic Preservation Office in Phoenix to review. After reviewing and commenting, the office determines whether or not the building is important on a state or national level. Albright Training Center was recognized as state significant.

"The designation means that it's important. It doesn't do anything except to say this is a neat story," Rotegard said. "Sometimes people think designation ties your hands, but you kind of have to go at it like a private investigator. The stories in this building are amazing. There are ways the building tells you how to handle things. So I think of it as an extra special challenge to tell the story."

Rotegard said the Park Service envisioned the training center, designed by NPS architect Cecil J. Doty, as early as the 1930s. But construction was on hold until the 60s after a post-World War II special appropriation from Congress.

After World War II and leading up to its 50th anniversary, The Park Service witnessed rapid expansion because of a growing public demand.

"Albright Training Center was the brainchild that was sitting on the back burner since the 1930s to deal with the expanding numbers of staff we also need to suddenly train up. We were hiring 10 to 1 in that time in our history," Rotegard said. "The national training center fell on very fertile times."

Mission 66 Era architecture was prefabricated, fast manufacturing and the first time anyone had ever used concrete blocks in a building, an idea that came from the military.

"Sometimes people look at this and think of it as not romantic, but it is very efficient," Rotegard said. "We adapted this whole building to be handicap accessible. They never even thought about that when they designed this building but it adapted beautiful because of the wide corridors and doorways. We didn't have to redesign spaces because we could adjust them for the new needs of the ongoing culture here."

More about Albright's history can be found by visiting www.nps.gov/training/hoal/.