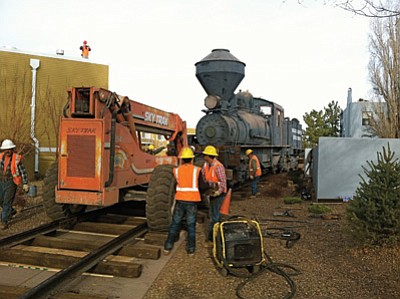 The Arizona State Railroad Museum (ASRM) may not have a physical location yet, but it recently acquired another piece for its collection.

The piece is a full-scale replica of an SD-38 diesel locomotive cab, a type of train that was built in the 1970s and is no longer in service. The museum is storing it in its U.S. Army munitions boxcar at Camp Navajo in Bellemont, said ASRM Chairman and CEO Al Richmond.

A railroad enthusiast from the Valley, Thomas Lerner, built the mockup for his personal collection. When Lerner died and his son Jon put the house up for sale, he had to find a new home for the replica.

Lerner was a member of the Scottsdale Model Railroad Historical Society, but since the group did not have space for the replica, the members offered it to the ASRM.

Because Lerner built the model in a room in his home, Richmond, Jon and six members of the Scottsdale Model Railroad Historical Society had to disassemble it to remove it. It took the group three and a half days to take apart the 12 by 9 by 7 foot replica.

"We took it inch by inch really," Richmond said. "We just started at what seemed like a good point and marked the different pieces and just started taking it apart."

Richmond said Lerner was very meticulous in building the replica to specifications.

"Even though it's built out of wood, if an engineer walked into it he would think he was virtually in a real locomotive cab," Richmond said.

The ultimate goal is to turn the cab into a simulator so people can find out what it's like to operate a train. Richmond also plans to paint the locomotive in appropriate Arizona railroad colors.

Once construction starts on the museum, Richmond will start reconstructing the model.

"I would imagine to really make it look the way we want it, I would say it may take us as much as a month to put it all back together," he said.

Besides the SD-38, Richmond estimates he already has about $2.1 million worth of inventory for the museum.

Right now, Richmond is in the process of obtaining construction bonds for the museum. The planned location for the museum is 21 acres of land south of Rodeo Road, near where the Grand Canyon Railway crosses the road.

Plans for the museum call for a 106,500 square foot facility including interpretive exhibits, archives, an art gallery, meeting rooms, interactive computer areas, an auditorium and an outdoor amphitheatre. According to the ASRM website, the museum would create a minimum of 340 jobs.

The expected cost for the museum is about $25 million, including design, construction, acquisition and restoration of artifacts and preparation and installation of exhibits. Money for the project will come from bonds, grants, donations and legislative appropriations.

"We're just moving forward trying to get our construction bonds going, so it's a work in progress," he said. "It's going a little slower than I would like to see it but it's moving, it's happening."

More information about the ASRM is available at www.azstaterrmuseum.org.

GCR had planned to display one of its diesel locomotives in that area, but a lead paint issue prompted staff to look for another option.

The 1923 Shay had been on display for some time at the GCR depot before the 1906 Locomotive No. 29 took its place after being restored. At that point, the museum's Shay locomotive went to be stored on one of GCR's side tracks near the shop.

From the GCR main line, railroad staff installed track and used 33-foot long panels of railroad track to move the 70-ton locomotive to the display site.

"They would move the locomotive onto those 33-foot panels and then pick up the ones behind it and move them up, leapfrogging the locomotive," Richmond said. "They made it look easy."

Officials plan to keep the locomotive on display in the courtyard for about two years.

"There were six Shay locomotives that operated in Arizona, and all of them have been scrapped-none of them exist anymore," Richmond said. "But this No. 5 was the duplicate of the No. 5 that operated with the Saginaw and Manistee lumber company here in Williams. This is one of the reasons we jumped at the chance to acquire it."

"These geared locomotives, they could go into those areas where the general regular steam locomotives could not," Richmond said. "So they could literally climb up the side of a mountain."