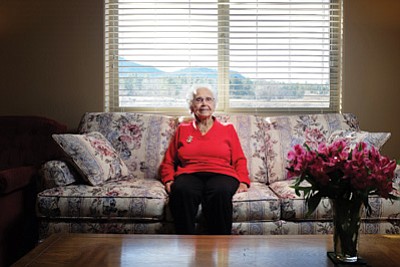 WILLIAMS, Ariz. - New Year's Eve is a time to celebrate with family and friends, reflect on the past year and look forward to the future. One Williams resident has even more of a reason to celebrate, since Dec. 31 is her birthday. And this year is a major milestone - Rosa Lee Olson turns 100 years old today.

As chance would have it, Rosa Lee also shares a birthday with her great great granddaughter Delaney, who turns 1 year old today.

"She was born on my birthday," Rosa Lee said. "I think that's great."

"Things weren't very prosperous," she said. "It was hard times then."

"My father was very strict," she said. "If we would go to the store to buy something, if I would pick out a coat or a dress or something that I liked real well, my dad would say, 'If you have the money you can buy it, but if you haven't forget it,' because we did not charge. Credit was not done at my house."

After graduating from high school, Rosa Lee attended business college in Springfield, Missouri. She married her husband William Nelson Olson in about 1933.

"He was just a farmer boy," Rosa Lee said. "He was living on the ranch. He was very capable and everything, but he didn't have a job. Every year they would go someplace out of the state to harvest, he and his brother and so forth."

Rosa Lee's son Larry said his father had to go where he could make money during the Depression.

"He was a real hard worker and he was just determined to go out and find whatever work was available back then," he said. "In those times, you just went to where they could get a job. As a young boy he would go off into other states to pick strawberries and the like."

In 1935 Rosa Lee and William had their first of two children, a son named Glenn. Around that time the Olsons moved west.

"The little town where we were living, the wages was just dirt cheap," Rosa Lee said. "My husband, he had come west because somebody had told him that they paid better in the west than what they did (in Missouri)."

At first, William and his brothers went to California. However, they didn't like it there so they moved to Arizona. One of William's brothers stayed in Arizona, but William went back to Missouri.

"His brother they were very close and he just kept wanting him to come back," Rosa Lee said. "So we finally decided to come back to Arizona."

When the Olsons came to Arizona, they lived in Flagstaff for a time and then Clarkdale. William worked as a mechanic and auto body man. In about 1943, he bought the Chevrolet dealership in Seligman. The Olsons had their second son Larry in 1945.

The family moved to Williams in 1960 so William could operate the local Chevrolet and Buick dealership. They ran the dealership until 1985 when they sold it, but have stayed in Williams ever since.

"She really has enjoyed living in Williams for the majority of her life," said daughter-in-law Sheryl Olson.

The Olsons will celebrate both Rosa Lee's 100th birthday and Delaney's first birthday at the party.

Rosa Lee said she is looking forward to it.

"All my family will be here," she said.

"In my family it was very common for some of the older people to live to be 100," she said. "It seemed to run in my family, because there were several, but they were uncles and so forth that I didn't even know."

Rosa Lee has also been an active bowler for about 50 years.

"In fact not too long ago I even got a certificate that I had bowled so many years," she said. "Of course I've treasured every bit of it."