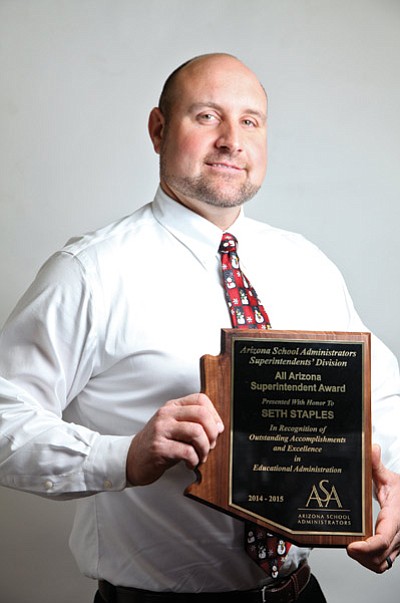 ASH FORK, Ariz. - In the past few years, Ash Fork Joint Unified School District has transformed from a struggling district to a top-performing district. Leading the turnaround was Superintendent Seth Staples, who recently received the All-Arizona Superintendent of the Year award for small districts for his efforts.

Staples' award is the latest in a list of major achievements the district has earned recently. For the 2012-2013 school year, the district tied for ninth place on the Arizona Department of Education's (ADE) list of top-performing districts in the state. In 2013, school board member Barry Sharp received the All-Arizona School Board Award. In April, high school math teacher Sonny Martin was named the overall Yavapai County Teacher of the Year and middle school language arts teacher Jeaneen Leach was named the county's small schools teacher of the year. Then for the 2013-2014 school year, the Arizona Department of Education named Ash Fork the number one performing district in the state.

Staples was nominated for his award by Ash Fork school board members and Cindy Daniels, the assistant superintendent of Chino Valley Unified School District and the vice president of the Yavapai County Education Foundation.

Sharp said the board nominated Staples because of his tireless efforts to get his students the best education.

"Seth's worked hard, he's put in many many hours, he's made sure all of his teaches are qualified," Sharp said. "The staff likes him, the kids like him, the teachers like him and the board likes him."

Debra Duvall, executive director of the Arizona School Administrators Association, said a selection committee made up of seven superintendents from around the state scored each nominee in several categories to determine the best candidate for the honor. The categories included short- and long-range planning, relationships and communication to all constituencies, leadership in curriculum and instruction and the management of student activities, personal and professional qualities, and personnel, business and financial management.

"We recognized not only his enthusiasm and the kinds of things that he does to help the school district to achieve success, but we acknowledged that Seth has invested in professional development for his staff and that plus his vision and his leadership resulted in Ash Fork being named by the Arizona Department of Education as the number one district in Arizona for student achievement," she said. "He's done a very nice job."

Staples decided to go into education because his grandfather and mother both worked in the profession. After attending Northern Arizona University, Staples began teaching social studies and science at Mount Elden Middle School in Flagstaff. After two years there, he came to Ash Fork where he taught second and fifth grade. Then he worked as the student services director for two years before becoming the superintendent four years ago.

Ash Fork was not always a high performing district. In 2010, the district received the equivalent of a D rating from the Arizona Department of Education for student performance.

"We were one year away from the state starting to come in," Staples said. "We were a failing district and then we just kind of worked our way up."

A school improvement grant and some new ideas helped get the district back on track. Using other successful districts as a model, Staples started focusing on student engagement and how teachers were delivering the curriculum.

"Before we just kind of followed the textbook, you know day one is chapter one and so forth and so on, but the excelling districts weren't doing that," he said. "They were actually following a curriculum map throughout the year and finding their own resources. The textbook would be kind of a side resource, but it wasn't the guide anymore."

Staples emphasized that the district would not be where it is today without its dedicated staff.

"Really I think it's more about my staff than I think it probably is about me," he said. "Those people who actually visit our school district down there in Ash Fork, it only takes moments for them to see that there's just really a good culture of people working together to help students be successful."

After the school district's dramatic turnaround, other school districts look to Ash Fork as a model nowadays the way Ash Fork used to emulate other districts. Although Ash Fork has had a successful past few years, Staples said the work isn't over yet.

"The big focus right now is staying up there," he said. "Benson was number one the previous year and they went down to the number 10 spot. Getting there is just one step, but we definitely want to stay up there."

One of the major challenges Ash Fork faces stems from a tax settlement with Transwestern Pipeline Company. The district will have to repay about $400,000, which is more than 10 percent of the district's budget, in overpaid property taxes it received from the company.

In order to address this unexpected payment, Staples is looking into collaborating with other districts to potentially share resources such as education specialists, outsourcing some services, and working with the legislature to give small schools a voice in situations like the Transwestern settlement.

In addition, the new Common Core standards are a major change to which the district is adapting. Staff will focus on writing this year and increasing rigor overall in the classroom. The district will use quarterly assessments to allow students to relearn and retest if they are not mastering the standards. Staples will also work on increasing achievement at the high school by implementing some of the techniques staff used at the elementary and middle school but for a more mature student population.

"We kind of like the challenge of having a more rigorous curriculum and we kind of feel like it's needed for Arizona to help our kids be successful," he said.

With all of the improvements Staples has made in the past few years coupled with his plans for the future, Sharp said Staples is a worthy recipient of the All-Arizona Superintendent of the Year award.

"I just think that he deserves it real well," he said. "He's a hard worker and I'm sure he's going to be one of the top superintendents in this state for many years to come."