Williams resident keeps sign painting tradition alive
Fred 'Perico' Avila continues to paint window signs how he always has - with a brush, a paint can and a smile 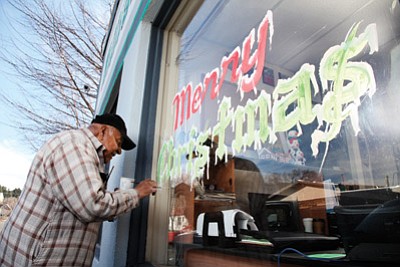 WILLIAMS, Ariz. - For the past 60 years, decorated store windows around town have helped usher in the holiday season thanks to Williams native Fred "Perico" Avila of Avila Signs. Avila uses paint to transform ordinary panes of glass into vivid holiday greetings, like the one on display at the Williams-Grand Canyon News office.

Avila likes to tell people he's been painting signs since 1934. Only a small handful of people who know him well realize that was actually the year he was born.

"I say yes, I was born with a brush in my hand," he said with a laugh. In reality, Avila got into sign painting in 1953, soon after he graduated from Williams High School. While in school, Avila took several art classes and his teachers noticed his talent.

"They could tell that I had a little bit in me I guess I think," he said. "I would decorate a little bit of the windows for Christmas at the school or for a special occasion they would get me to draw something on the blackboards for open house."

"He said, 'I've seen some of your work,' because he was on the school board and he just mentioned it to me. He would say, 'You know you've got some art talent. Have you ever tried to paint signs?'"

Avila's sister worked at the drugstore and also encouraged him to give sign painting a try.

"She mentioned, 'Mr. Smith said you should come by and see him,'" Avila recalled. "'He says he'll be willing to buy you some paint and brushes so you can start lettering and practice or something. He says you've got a little talent he thinks anyway.'"

So Avila gave it a shot and painted "Smith's Corner Drugstore" on the sideboards of the pharmacist's pickup truck. From there, the workers at the body shop asked Avila to do some lettering on a tow truck. Gradually, more and more people starting taking notice of Avila's work and asking him to paint different things.

Soon after he started painting signs, a local church asked him to paint a holiday greeting in their window in Old English lettering.

"I was afraid to start doing that lettering because to me it was very hard," Avila said. "At first it was just nothing but block letters. You square them off here and there."

But Avila tried the more elaborate writing by looking at the lettering on a Christmas card as an example. Nowadays, Old English writing comes easy for Avila.

Throughout Avila's career, he's painted lettering on everything from windows to crosses to police and fire trucks to airplanes.

"It's getting to be an old (art) sign painting with all this modern technology.," Avila said. "Especially with the vinyl lettering on ambulances and vans and trucks and cars and fire trucks and police cars. That's all stick on letters. They do that on the computer. Mine's all free hand. I'm old fashioned. You can't teach an old dog new tricks. Like I still say, practice makes better."

When Avila starts a project, he begins by laying out what he's going to write. He measures to make sure it will be centered and also makes sure the writing will be level. Depending on the size and complexity of the sign, it usually takes Avila about one to two days to complete a project.

Avila enjoys painting because it allows him to be creative.

"I'm just always trying to do different style lettering," he said. "You keep on learning and get different ideas. I'm still learning at my age. There's always time to learn something."

Besides starting his own business, Avila's work as a sign painter also got him a job maintaining signs on the Kaibab National Forest for about 20 years. At that time, the national forest used wooden signs that were engraved with letters and then painted. Avila maintained the signs in the Williams area and at the North and South Rim of the Grand Canyon. When he wasn't traveling back and forth from the North Rim, Avila would spend time painting signs in a small shop near Camp Clover in the winter.

Although Avila mostly focuses on signs, Avila's painting ability is not limited to words. While he served in the armed forces, Avila would draw portraits of famous people and of his fellow service members' relatives using charcoal. In Williams, Avila's drawing can be seen in the Williams Middle School gym where he painted the school mascot, a falcon, on the wall.

After all these years, Avila still gives credit to the pharmacist Mr. Smith for launching his career. When he made his first batch of hats with "Avila Signs" printed on them, he presented one to Smith in appreciation for getting him into the sign business.

Avila has four sons, two of whom are interested in different art styles. He always gave his sons this advice: "Do what you think you're good at and follow it, whatever it is. Find yourself a job you're going to plan to live with the rest of your life, something you like to do."

And Avila has followed his own advice.

Remembering the sign man: the art of Perico Avila
Letter: Perico's Hideaway was first Williams theme park
Painting with Williams history finds a home
Letter: School bus is painted and ready for Halloween
Q + A with the News
Event Calendar