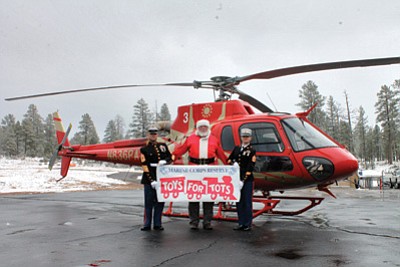 TUSAYAN, Ariz. - For the Supai tribe living at the bottom of the Grand Canyon, Christmas came in the form of G.I. Santa flanked by Marines and volunteers from around Arizona.

The Supai is one of the more isolated tribes in the United States. They live year round in the Grand Canyon.

Every year Toys for Tots, a non-profit organization of the United States Marine Corps and a battalion of volunteers deliver Christmas to the Supai.

This year, Santa's helpers included several U.S. Marines from the Environmental Services Division, a reserve unit out of Phoenix,

Master Sgt. Anthony Haechler has volunteered for Operation Supai off and on for the last 10 years.

Haechler and fellow Marine reservists volunteer every year for multiple Toys for Tots events but flying into the Supai village continues to be one of the most unique experiences the program offers.

"We volunteer for numerous functions," Haechler said. "But it's the uniqueness of going into the Grand Canyon and being

flown in, what you're about to do is unreal."

"The kids just love it. They see Santa and see you in your dress blues," Haechler said. "I'd do it every time if I could and I try to do it as much as I can."

In 1998, Lieutenant Colonel James McGee and his wife Tina McGee took over coordination of the event.

"Hal was interested in the needy children that were less privileged," Tina said. "He was very aware, being in northern Arizona, of all the Native American communities. He felt that he not only wanted to help local children, but he wanted the outreach to be to isolated tribes and villages that needed Christmas as well."

As a tribute to other Marines and to her husband, Tina continued to coordinate the operation after her husband's death.

"It's a tribute not just to my husband but to Hal Jensen, Jim Cullens and my

co-coordinator Rick Wiselus, who we lost this year as well," Tina said. "I'll continue to do this in their honor."

Since 1996, the operation has grown each year, taking Tina the better part of a year to coordinate.

One of Toys for Tots partners, St. Mary's Food Bank, has worked to help with the operation since 1998.

Barry Brennan, who is on the Board of Directors for both St. Mary's Food Bank and Toys for Tots, is one of the volunteers who flew to the village.

Brennan said the food bank and the Marines work together to help the operation run smoothly.

"The food is brought up in a semi from Phoenix, then they stop in Flagstaff to load the toys from Toys for Tots," Brennan said. "Then they spend the night in Seligman so they can get to Hilltop Monday morning by 9 o'clock."

Hilltop, the trailhead for hikers to the village, is located at the end of Indian Road 18 between Seligman and Peach Springs.

The Exchange Club of Flagstaff partnered with Toys for Tots to provide the hygiene products and writing utensils as well as backpacks for the children.

Santa Claus, played by president of the Marine Corps League of Charities Kenneth Stanley, said many of the families the Marines and other organizations work with do not have exposure to a Christmas environment - something that he and other volunteers want to impart this holiday season.

"I've been playing Santa ever since I've been with the Marine Corp League and just to see the kids smile and to interact with young kids and to let them have Santa Claus during Christmas time is worth it," he said. "This is something they look forward to, not just for Christmas, but all year long."

In years past the biggest highlight for villagers was the landing of the Marines,

"They looked forward to the military helicopters flying in because they could tell the Marines were coming," Stanley said. "Not just Santa Claus but the Marines."

In 2012, the CH-46 Sea Knights helicopters, flown by the Marine Corps, were replaced by the Osprey. The Osprey is a large tilt rotor aircraft that takes off and lands like a helicopter. Once airborne, the Osprey's engine rotates, converting the aircraft into a high-powered airplane. Because of the high impact winds created by the Osprey the Marines are no longer able to land at the village.

For the last two years, Papillion Helicopters, out of Tusayan, has donated its services and time to the operation.

After 10 years of flying tours over the Canyon, Musselman still finds flying into Supai a thrilling honor.

"Flying down into Supai is always a treat for us and dropping into the canyon and into the village is really spectacular," Musselman said. "I was asked to fly the program because I was familiar with it."

In addition to 18 loads of toys, food and supplies Musselman flew two volunteers from St. Mary's Food Bank, three volunteers from Toys for Tots and two Marines to the village.

Musselman was also scheduled to fly Tina, several volunteers and Haechler and Gunnery Sgt. Laura Biggar along with Santa Claus to the village.

Because of scattered snow showers the group was forced to postpone their flight until the following day.

Volunteers and Marines already in the village were able to cook hot dogs and hamburgers and share in a holiday meal with the villagers. Santa Claus and his helpers made the flight later in the week.

Around 150 kids received presents and 6,000 pounds of food was delivered to the tribe.