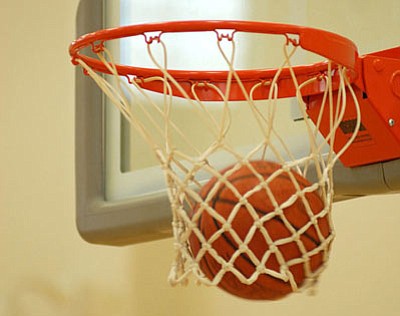 The Vikings started off last week with a key 67-59 win against Ash Fork on Dec. 9.

"I've preached to the guys that we must win the games we are supposed to win and this was one of those games," Dunn said.

Leo Lopez led all scoring in the game with 21 points to pair with his 12 rebounds in route to another double-double. Christian Plascencia, Austin Kennelly, and Martin Soria rounded out the majority of the Vikings' scoring with 16, 14, and 11 points respectively. Soria had another great night adding to his steals totals with another 4 steals. Going into the week Soria and Kennelly were tied for fourth in the division for steals per game.

On Dec. 11 the Vikings traveled to Rancho Solano and routed the Mustangs with a score of 88-57. Joseph Strunk took the majority of the shots for the Mustangs and barely missed. Strunk scored 30 of the Mustangs' 32 first half points.

"The game was a dog fight until about half time, with our boys besting them with superior teamwork," Dunn said. "I think this is the best we have distributed the ball as a team so far this year."

In the second half, the Vikings forced the Mustangs to score without their key shooter. Kennelly, Soria, Ryan Smiley, and Diego Pedraza rotated off of Strunk while the Vikes ran a triangle and two defense. The two defenders were responsible for making sure that Strunk never touched the ball.

The Vikings started employing this technique with about five minutes left in the first half and Strunk didn't attempt another shot until the middle of the third quarter. At that point Strunk had gone cold and his shot was way off.

"Our guys worked him hard," Dunn said. "You could see the frustration on his face possession after possession watching his teammates fail to beat our triangle zone with a four on three advantage."

Although the Vikings only had a six-point lead at half time, the team exploded in the second half to dominate the Mustangs.

"Having Leo's physical presence really gives us an advantage, and we have kept him relatively clean this year in terms of foul trouble," Dunn said.

"The scary thing is we put up 88 points but only shot 51 percent from inside the arch, 40 percent from beyond it, and 33 percent from the free throw line," Dunn said. "It didn't hurt that we had 53 rebounds as a team to create second and third chances."

Lopez squeaked out another double-double by collecting 10 rebounds and 16 points. Kennelly led all scorers with 17 points for the Vikings. Soria contributed 16 points. Dunn said normally the team does fine as long as they keep four players in double digit points, but the team couldn't accomplish that against Sedona. Sedona played a tough game and the team was well coached.

"Unfortunately for us, things just didn't go our way," Dunn said. "In the end I think it was our emotions as a team that cost us the game. We had opportunities to win the game late despite some questionable officiating, but we couldn't capitalize."

Soria created two turnovers late in the game, but the Vikings rushed things offensively and turned the ball back over. In the end Lopez had a chance to win the game with an easy put back but he wasn't able to convert. Dunn said Lopez was pushed on the shot, but the officials did not call the foul.

"Obviously this is one we wish we could have back but we've reflected on the loss and have started to evaluate what we can do to prevent from being in that situation again," Dunn said. "We have a perfect balance of senior leadership and youthful enthusiasm that I think as long as we learn these lessons now we have a chance to do something later in the year."

The Vikings will finish off the first portion of their schedule this next week. The team played a home game Monday against Northland Preparatory Academy after the News went to print.

The Vikings take on Mayer at home on Thursday with junior varsity team taking the court at 4:30 p.m. and the varsity squad playing at 7 p.m. The Vikings will travel to Tempe Prep on Friday.

"Our goal is to put up three more wins to put us in the best possible footing for the first rankings that come out following the Dec. 19 game with Tempe Prep," Dunn said. "I'd like to go into the break on a winning streak before we come back to the St. Johns Tournament in early January. We know we have a tough road ahead of us but I'm really proud of the way the team is bonding together this year in the face of a loss."