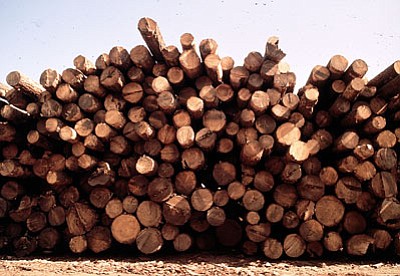 WILLIAMS, Ariz. - Williams will soon be home to its second lumber mill. Good Earth Power AZ, LLC (GEPAZ) signed a lease on a 37-acre parcel in Williams that will become the site of a lumber mill and material processing facility to support forest restoration through the Four Forest Restoration Initiative (4FRI).

According to information released Dec. 12, Good Earth hopes to start site preparation before the end of the year and to begin producing lumber and wood chips by March 2015. The Williams sawmill will initially be optimized to cut logs ranging from seven to nine inches in diameter.

The Good Earth mill site will be located south of Interstate 40 and west of South Garland Prairie Road. Good Earth's mill will be situated immediately west of the Newpac Fibre mill and north of the Perkins property. However, the Good Earth project is not affiliated with Newpac Fibre.

"There was conversation with Newpac at one time, though we're not talking about that at this point," said Good Earth spokesperson Lori Martinek.

"We'd like to get the slabs in place before winter sets in so that we can establish the initial production line during the coming months," Rosamond said.

Williams Mayor John Moore said he isn't sure how fast Good Earth will have the mill up and running but he welcomed the possibility of new job opportunities in the area.

"Sounds like a pretty big undertaking to me," he said. "They claim they will create a lot of jobs. They will be having job fairs. We'll just have to see. It's a different kind of job than we have now that isn't tourism related, if it comes about."

According to Good Earth, a job fair to promote opportunities at the Williams processing center and other Good Earth facilities is planned for early January. Martinek estimates the new mill will create about 100 local jobs.

"From the start, there has been a considerable amount of money and resources invested in building infrastructure necessary to support active, long-term forest restoration," Rosamond said. "Now the results of those efforts will be clearly visible through new jobs and economic development in the community and increasing restoration work in the forests."

Good Earth said biomass from nearby west side task orders will be trucked to Williams for composting or chipping. On the east side of the 4FRI project region, chipping is done in the forest and then delivered directly to customers. Slash from the same forests heads to the NOVO Power biomass plant in Snowflake.

The Williams site will be the initial processing center for Good Earth's Soils Division. Slash will be composted into soil on site and the facility will feature two bagging lines for composted and chipped products. A manual line will be used to bag soils and bark. A second, automated bagging line will have the ability to add color to chips for decorative landscaping uses.

Plans also call for the addition of drying kilns, a pole peeler and other equipment to expand the mill operation over time.

"There will be a nice steady progression of board feet once we get started," noted Rosamond. "We plan to utilize the entire footprint of the parcel."

The mill is expected to process the smaller diameter trees that will be thinned on west side task orders over the remaining eight-year life of the Phase 1 4FRI contract.

Expanding markets and increasing processing capacity will make it essential for restoration work to proceed at a faster pace.

"We need to be restoring 2,000 to 2,500 acres a month by June 2015 to support the capacity that we are creating," Rosamond said. "That means more logging sides, more loggers, more truckers and more jobs at all GEPAZ facilities."

Increasing capacity will allow GEPAZ to reach the target goal of thinning 40,000 acres per year by June 2016, without any government subsidies.

"We will complete the majority of the forest restoration work utilizing in-house capacity with some outsourcing based on interest from potential logging partners. This will allow us to retain the necessary flexibility to respond quickly to changing customer needs, and to keep restoration moving forward in the forests," Rosamond added

By June 2015, the company projects that it will have assets valued at more than $60 million throughout the project region, directly employ more than 300 people and have invested millions more in the expansion of its processing facilities in Williams and Heber.