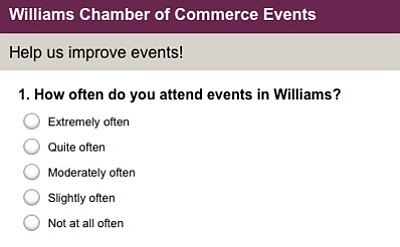 The Williams-Grand Canyon Chamber of Commerce's events survey is available online at <a href="http://www.surveymonkey.com/s/QWB3XJN" target="_blank">www.SurveyMonkey.com/s/QWB3XJN</a> through Dec. 31. (Survey Monkey screenshot)

WILLIAMS, Ariz. - The Williams-Grand Canyon Chamber of Commerce is hoping to improve on its events offerings, and community members can help by sharing their ideas and opinions.

At the start of November, the chamber issued a 10-question survey about local events. Chamber members received the survey by mail, and an electronic form was available online.

As of Nov. 17, the chamber had received 28 online responses and 29 paper responses.

Chamber board member Kerry-Lynn Moede, who was recently appointed as the Events Oversight Committee chairperson, put together the survey.

"The first thing you do is think about which events you're going to do. It seemed to me that it would be a good idea to ask people what they wanted instead of assuming that we knew," she said. "It seemed as though we should ask for the people we serve's opinion before we make decisions."

Moede said one of the most surprising things she learned from the survey results was that people believe it is more important for the chamber to spend money on marketing than events.

"So they do understand that the work the chamber does is really important, because if people don't hear about Williams, nobody's coming here," she said.

The Williams-Grand Canyon Chamber of Commerce's Events Coordinator Darlene Bitter had another theory for why people might favor marketing over events.

"I think what people are kind of looking for is actually what's going to benefit Williams overall, not one specific entity or whatever, and I would think that the marketing benefits Williams as a whole," she said.

Another part of the survey that surprised Moede was the number of people who would like Rendezvous Days to take place again. According to Williams News archives, Rendezvous Days last took place in 2010 following a hiatus. The event featured black powder shooting, artisan craft displays, turn of the century survival demonstrations, a junior archery contest, tomahawk throw and an animal-tracking walk.

One of the least surprising findings from the survey in Moede's opinion is that people would like to see more car shows.

"We had not pursued very strongly any car shows because they tend to kind of come here on their own, but maybe that's something we will make more effort on," she said.

After reviewing the survey results so far, the chamber plans to make some changes in the future.

"The Taste of Williams needs to be kicked up a notch," Moede said. "We want to do that and include more people. If we're not going to get people from out of town to come to that I would really like to create an event that everybody in town wants to come to, because that's one of the biggest ways the chamber makes its money for the year."

She added that another priority would be fundraising for Mountain Village Holiday decorations for the Visitor Center and Chamber offices, the stage, the Gateway to the Grand Canyon arches, and the trees on the ends of town.

Bitter said the chamber has already decided to eliminate the Labor Day parade based on the survey results.

"That was one of those events where we used to have a Labor Day Rodeo and the parade coincided with that," she said. "When the rodeo went away we just didn't have that big of attendance for the Labor Day parade, so we decided to do away with that one."

Some of the ideas for new events that survey respondents suggested included music festivals, beer festivals, street markets, equestrian events and ethnic food events. The chamber is looking into a chuck wagon cook off and bike and foot races, among others.

The survey will be available online through Dec. 31 at www.SurveyMonkey.com/s/QWB3XJN.

"I would very much like to have everybody's opinion, not just chamber members, because it affects everybody," Moede said. "One of the best ways we can improve our events is to have more people involved. If you've ever been the person who says, 'I hate that event' or 'I don't like to go to it' or 'I think that's stupid,' then come help us make it better."