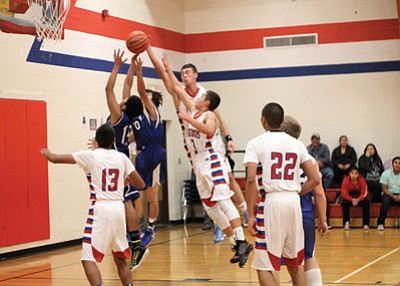 GRAND CANYON, Ariz. - The Grand Canyon Phantoms lost their first game against El Capitan at home Dec. 5. The Phantoms went on to play the Fredonia Lynx Dec. 6, with a close scoring game turning into a one point loss.

The loss to El Capitan helped to re-focus the team's energy for their game against Fredonia.

"They were a completely different team then on Friday night," head coach Jenn Hogan said. "They moved the ball well and did a much better job on transitions for both offense and defense. They drove to the bucket, literally every possession. Tyler Jones had a really awesome game with his double doubles."

During the first quarter, junior Ian Jones scored the first points of the game. It went on to be a low scoring game with a buzzer shot calling the game during the final quarter.

"We got fouled and they didn't call it," Hogan said. "It was kind of upsetting but it was an awesome game."

Hogan said smooth transitions and working on offense and defense paid off for the team and is something the team will continue to work on.

"They were a lot better staying in their lanes when they were running the floor. They're doing a lot better running the offense. Defensively, they're doing a much better job stopping the ball, not playing scared," Hogan said. "They still need to work on the help side defense, which is still pretty weak. Overall they need to believe in themselves but they're taking it strong."

The Phantoms have one week to prepare for the Pepsi Tournament where they will play on Dec. 12 in Flagstaff.

Girls head coach Jeff King said the girls played a strong defense against a team the Phantoms see as one of their main rivals.

"The girls were happy," King said. "They've worked hard and their shots were falling right. It was a good game."

By half time the Phantoms were up by six points and turnovers helped the Lady Phantoms continue to score.

"We got our victory early," King said. "Last year our victory didn't come until half way through the season. We've been practicing being a fast break team and our rebounds and that really paid off," King said. "Point guard Deya Ramos and center Yesenia Jimenez also played a really good game."

The Lady Phantoms lost their second game against Fredonia Saturday, with a score of 38 to 21.

The Lady Phantoms play Mojave High during the Pepsi Tournament at Flagstaff High on Thursday, Dec. 11/ More information is available from Grand Canyon School at 928-638-2461.