Still no water at Dogtown I Well 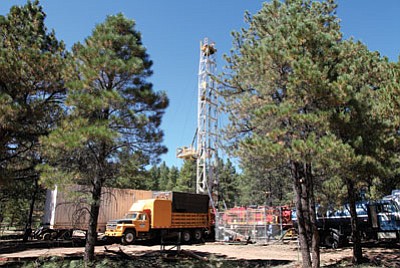 Drill Tech employees worked to salvage Dogtown 1 well in October. The city of Williams is now running out of options to revive the well. Ryan Williams/WGCN

WILLIAMS, Ariz. - After the latest attempt to revive Dogtown I Well failed, the city may have exhausted all of its feasible options for salvaging the well.

Recent attempts to fracture the well did not increase water production, and now the Williams City Council may soon have to decide whether to continue investing in the well.

Before the well failed on May 19, it was producing about 250 gallons per minute. After several previous unsuccessful attempts to remove the column pipe from the well using cranes, well workers sent charges down into the well in late July to help separate the pipe. The workers were able to remove all but about 30 feet of column pipe and the pump from the hole.

In September, the city spent an estimated $210,000 to employ hydraulic equipment used in the oil industry to try to remove the stuck equipment. That process was complicated by several soccer ball sized boulders that workers would clear, only to have them fall back into the hole when the drilling equipment was removed.

At this point, cement was poured into the hole, which would hold the boulders in place and allow drilling to continue. With the old pump and motor still stuck in place, workers drilled off to the side about 2/3 of the way down the hole to get around them.

After putting a new pump in place, the well was yielding about 40 gallons per minute. Officials believe the low production was a result of the concrete sealing off the water-producing portion of the well.

At the Nov. 13 Williams City Council meeting, council members advised staff to move forward with the next step, which was using gas gun charges to fracture the well for an estimated cost of $28,000.

"It's a controlled explosion where the gas pressure pushes out into the formation and it opens up the formation and cracks it and it will go back about 30-40 feet and open it up," Drill Tech owner Garth Owens said. "What happens when it opens it up is when the ground comes back down it doesn't settle in the same place. It opens it up and shoots sideways and keeps those fractures open."

At the meeting, Owens estimated that there was an 80-90 percent chance that the process would create the desired fractures without collapsing the hole.

The workers sent the gas gun charges into the hole a couple of weeks ago. Although Drill Tech was confident that the process was successful based on readings from their instruments, when the pump was placed back in the hole, the well was still only producing about 40 gallons per minute.

"It's kind of baffling," said Public Works Director Kyle Christiansen. "It doesn't make sense, because we're literally right next to the old hole. It should be producing the same water it made before."

The next step is to send a camera into the well to determine if the gas gun charges were successful. The camera was scheduled to go into the well on Monday, when the News went to print.

"It'll show fractures in the formation and the concrete," Christiansen said. "Whatever that information reveals, we'll make our next step, and I'm not sure what that'll be. It could be hitting it again with a gas gun, or we might present to council about walking away."