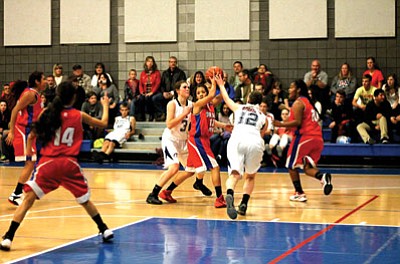 The Lady Phantoms fight to keep the ball during the Nov. 25 game against Northland Preparatory Academy. Loretta Yerian/WGCN

GRAND CANYON, Ariz. - The Lady Phantoms lost their first game of the season against Northland Prepatory Academy (NPA) in Flagstaff last Tuesday. Despite the 55-29 lose, Phantoms head coach Jeff King is optimistic and said the girls worked hard and had many take aways from the game.

"Last night was a good game, my girls did really great," King said. "They hustled - really, really hustled, which I liked. Our team is different from last year. This year's team wants to keep working hard and they want to keep doing what they're doing. They know that if they keep working hard, they're going to get results,"

The Phantoms led after the first quarter but lost the lead in the second quarter facing a 28-17 score at half time.

"They got pressured through the whole game and my girls got a little flustered with their defense," King said. "I tried to calm them down and run plays but NPA was quick and strong. They kept pressuring my girls and forcing them to pass and pick up their dribble."

The team tried to make a come back in the middle of the third quarter only to lose it.

"I saw we were coming back a little but after that we started throwing turnovers and then switched around there," King said.

Throughout the game, more experienced Phantom players were quick to give encouragement to their teammates. Something, King said, helps give the under classmen confidence.

"My juniors were encouraging the whole team, telling them not to give up," King said.

"Last night was their first game and I had at least seven girls that have barely played basketball. Even the freshmen were like 'We're not giving up, let's keep playing hard.'"

King put the freshmen into the game, letting them experience the heat from NPA.

"I used them too," King said. "My freshman girls, I figured they would be scared. But to me they didn't look scared."

Many of the Phantoms key players are upper classmen. King said he sees a lot of strength and support in these players.

King added the team will work on different plays and passing for their next game.

"In practice we are going to be focusing on full court man to man press breaker," King said. "Last time we didn't even run two plays. I tried to tell them to run plays but they couldn't. The other team was too strong and a little too quick. They kept my girls from doing what they wanted to do. We have a lot to work on, which is mainly the press breaker and passing."

The Phantoms will play El Capitan at home, Dec. 5.