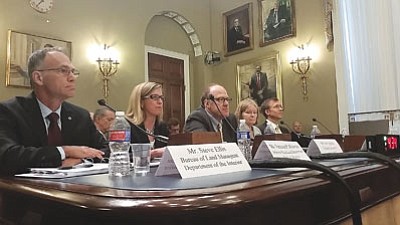 Arizona State Land Commissioner Vanessa Hickman, second from left, told a House panel that a bill to streamline the land-exchange process would unlock surface and subsurface land to revenue-generating uses, such as commercial, wind and solar development Photo/Paulina Pineda

That, in turn, would mean more money from trust lands that could go to local schools, said supporters of the bill that would make it easier for states to swap land currently surrounded by federal land.

In Arizona, Hickman said, state trust land is landlocked by at least four monuments, including about 23,000 acres inside the Grand Canyon and Parashant National Monument boundaries.

"We cannot make revenue producing opportunities off of those lands because we have access issues," she said, in addition to the fact that state and federal missions are not compatible.

But Rep. Raul Grijalva, D-Tucson, said that while he supports the concept of the bill, he cautioned that it could strip away necessary protections, like compliance with the National Environmental Policy Act.

"We're running a risk that we could be exchanging lands and making the situation worse," said Grijalva.

He said that an exchange could open land up to unnecessary mining, pointing to land around the Grand Canyon where uranium mining is currently banned.

"I would hate to have a chunk of state land that all of a sudden opens itself up to that extraction," said Grijalva, the senior Democrat on the House Natural Resource subcommittee considering the Advancing Conservation and Education Act of 2014.

Its sponsors say that not only would that allow for more efficient development of lands, it would also increase funding to local school systems - the reason state trust lands were created in the first place.

Hickman said state schools are the largest of the 13 beneficiaries of funds generated by Arizona's trust lands, with about 10 percent of the revenue split between the miners' hospital, the corrections and juvenile corrections departments, among others.

Hickman said the 23 states represented by the Western States Land Commissioners Association, of which she is vice president, manage 447 million acres of trust land. The Arizona State Land Department manages about 9.2 million acres.

The bill could unlock thousands of surface and subsurface acres that, once available, could be used for mining or for commercial, solar and wind development, she said. Her department already manages four solar leases, three wind farms and has long-term leases with shopping centers in the Phoenix area, she noted.

At least one conservation group called the bill a "win-win" that would protect public lands while creating revenue for schools.

Paul Spitler, with the Wilderness Society, said there is broad support for such land exchanges to take place, but the process is flawed, costly and time consuming. The bill would fix that, Spitler said.

Moving state trust land out of conservation areas would not cause harm, but instead protect it from potential development, he said.

Hickman agreed that the process needs to change.

"Land exchanges have been a burdensome, inefficient process that many of the Western states have been going through since the lands were granted to the states in the first place," she said. "We need a different path forward."

Hickman said she thinks the bill will move forward because of "widespread bipartisan support."

"I don't see a lot of roadblocks moving forward," she said.