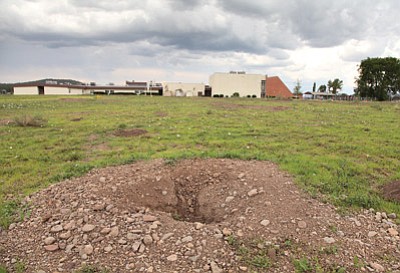 Prairie dog holes litter the playground at Williams Elementary-Middle School in Williams. Concerned citizens recently began shooting prairie dogs on the school campus in an effort to rid the school grounds of the animals. Ryan Williams/WGCN

WILLIAMS, Ariz. - Ever since Williams Elementary-Middle School (WEMS) was built in the 1970s, staff has struggled with controlling the prairie dog population on school grounds.

After previous efforts to relocate the animals have failed, some people have recently turned to a legal yet controversial alternative - hunting the prairie dogs.

Neither school officials nor the police chief know who is hunting the prairie dogs, but can confirm that the activity is taking place. The hunting is not school sanctioned, according to Williams Unified School District Business Manager Melissa Ellico.

According to Williams Police Chief Herman Nixon, it is legal to hunt the prairie dogs using pellet guns when kids are not on campus.

"They fall within the guidelines because prairie dogs are open season," he said. "The only thing they couldn't do was use any powder driven weapons inside the city limits. They're using pellet guns so they're not violating any laws so they're allowed to do it."

Nixon added that the police department hasn't received any calls about people shooting the prairie dogs.

The hunting season for Gunnison's prairie dog is from July 1, 2014 to March 31, 2015 and June 16 to June 30 2015, according to the Arizona Game and Fish Department's (AZGFD) hunting regulations. The season is limited to allow the animals to give birth. The agency also has a rule that people can't hunt within a quarter of a mile of any occupied residences.

Since no one knows who is hunting the prairie dogs at WEMS, the number of animals that have been shot in the last few weeks is unknown. However, some residents became alarmed about the situation after seeing prairie dog carcasses on the school fields.

SAVE-Meant to Rescue founder Robynn Eckel is concerned with the way people are handling the situation. She believes the district should continue to cage and relocate the prairie dogs as it has done in the past.

"It's inhumane treatment," she said of the hunting. "They are a pest, but it's too bad that we haven't evolved higher up to a better solution and much easier solution on them. Instead of asking for help or anything they're just kind of (using) brutality."

However, WEMS Principal Bryan Lords said his main concern is students getting injured from the animals and their holes.

"It's a liability for us to have them out there," Lords said of the animals. "We're just doing everything we can to try to keep the kids safe. I mean that's our priority, not prairie dogs."

In 2011, the Forest Service relocated 125 prairie dogs from the school property to a location on the forest. The next year they relocated another 260. Both populations are doing well in their new locations, according to Wildlife Biologist Roger Joos.

However, Lords said they prairie dogs have always come back, and he now believes the animals have multiplied.

"We've had a couple instances of kids getting bit and getting scratched by them so we said, 'You know what, children's safety is our number one priority so we've got to find something to do,'" Lords said.

Last year, the school purchased a special prairie dog fence that encloses the school property to prevent any more prairie dogs from coming in. It cost about $5,000.

"There's a metal mesh that's down about four to six feet down in the ground, and then the corrugated metal is attached to that metal mesh," Lords said. "Prairie dogs won't dig when they can't see. So as they go down far enough after they get down three or four feet they quit digging and they go somewhere else because they can't go anywhere."

After the fence was completed this spring, the plan was for either AZGFD or Forest Service officials to cage the remaining prairie dogs within the enclosure and then relocate them. However, the agencies recently told the district that they wouldn't be able to take any action for at least a year.

According to Joos, prairie dogs can only be relocated during a short window of time between July and August. It requires permits and skilled workers who know how to trap and take care of the prairie dogs.

"We don't typically do this, but the school's a public entity," he said. "It's a win-win situation for us. We help the school remove the prairie dogs and we repopulate areas in the forest."

When the district found out that no one would be able to help relocate the animals for at least another year, officials contacted the police department to find out what could be done. Soon after, the hunting began.

In the last few years, prairie dogs have bit or scratched as many as seven students. Additionally, last year two football players were injured after falling because of the animals' holes. One player fractured his ankle and the other broke his leg.

Prairie dogs can also carry diseases, like rabies and plague. Plague is a rodent disease that can spread to humans and other animals through infected fleas. Environmental Health Program Manager Marlene Gaither said the Coconino County Health Department hasn't detected any prairie dogs infected with plague in the Williams area in the 30 years she's worked for the agency. The last case of an infected prairie dog colony in the county occurred in 2011 in the Doney Park area of Flagstaff and the last case of an infected human was in 2007 at the Grand Canyon.

Every year in April or May, the County Health Department surveys areas that have active prairie dog colonies near communities. If the team doesn't see any prairie dog activity, that is a sign that the population could be infected with plague. At that point they capture fleas from the burrows and take them to Northern Arizona University to be tested. If the fleas test positive for plague, the health district will warn nearby residents and dust the prairie dog holes to remove the fleas from the area.

"Even though you haven't seen it there, I would still alert people that the prairie dogs have fleas and your pets can bring those fleas home and you want to de-flea your pets all the time, just in case," Gaither said. "I think with that prevention is always the best."

AZGFD Public Information Officer Shelly Shepherd said the school district did the right thing by installing the fence, but that hunting is not the best option for eliminating the prairie dog population.

"It sounds like some folks are maybe trying to do the quick fix for something that needs to be addressed in more detail," she said. "As long as they're following all of our rules and regulations, yes they legally could do that, but I don't think it addresses the whole situation and a long-term solution."

"The main thing that they want is wide open disturbed habitat, because they're small ground dwelling animals they fall prey to a lot of different predators," she said. "So the more wide open it is for them to be able to see potential predators, the better it is for them."

Disturbed means the vegetation has been changed or does not exist anymore.

Shepherd recalled that in the past when Cromer Elementary School in Flagstaff had issues with prairie dogs, officials decided to install a fence, remove as many prairie dogs as possible, and then install astro turf instead of grass on their fields.

Another viable option would be to continue with relocation efforts. Shepherd said officials must make sure the prairie dogs are not infected with plague and that there is a proper location before they relocate the animals.

"To some folks they may ask us, well you guys are kind of promoting both things, a hunting situation and possibly relocating," she said. "And our department tries to provide hunting opportunities for different folks for different things that they can without impacting the population. So we can look at it that way. But again we've kind of modified that hunting season to also address the reproductive rates of the particular animals."