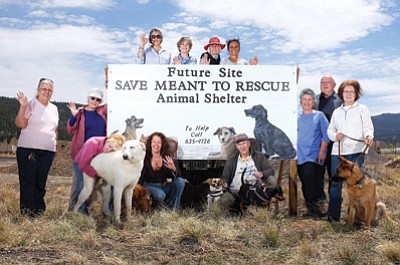 SAVE-Meant to Rescue members gather near the Rodeo Grounds, one of the potential sites for the group’s animal shelter. Preliminary plans for the shelter include eight kennels with attached exercise yards. Ryan Williams/WGCN

WILLIAMS, Ariz. - Stray animals in Williams are one step closer to having a temporary home, now that SAVE-Meant to Rescue (MTR) members have drawn up preliminary plans for their animal shelter.

The animal shelter was originally slated for some property near the Rodeo Grounds. However, city officials have suggested a piece of property north of I-40 near the Grand Canyon Railway shop and the city's water treatment facility. The location has not been finalized yet.

Paula Nord drew up the plans for the shelter, which include eight 10 x 8 foot dog kennels, each with their own attached exercise yard outside. The kennels will have doggie doors so the animals can go in and out as they please, except during the night when they will be kept indoors. More than one dog can stay in each kennel if they get along with each other.

Robynn Eckel, who started SAVE-MTR, said she hopes to make four of the kennels in a "plush" style and the remaining four in the more traditional chain link style for dogs that may have anxiety attacks and try to escape.

"I can't have very many dogs, but the ones I have are going to be treated right and be comfortable," she said.

Off of the entrance of the shelter will be a lobby area, an office and a restroom.

If the organization can raise enough money, its members hope to add a cat room behind that where the cats would each have their own condos. A cat yard enclosed with chicken wire over the top would also be attached to the cat room.

Behind the cat room will be an 8 x 8 foot quarantine room for dogs to stay if they have any health concerns.

Near the quarantine room will be some storage areas, as well as a shower room and grooming area so volunteers can clean the dogs upon arrival.

Overall, Eckel hopes the SAVE-MTR shelter will be different from typical animal shelters.

Depending on the city's water situation, which has currently put a freeze on most building permits, Eckel would like to break ground on the shelter sometime this summer.

Eckel is still waiting for a few quotes for some portions of the building, but she estimates the shelter will cost about $140,000 to build. The majority of the work will be done on a volunteer basis, which will reduce costs.

Once the shelter opens, Eckel hopes local residents may pledge a monthly contribution to help with operating costs.

SAVE-MTR is still accepting donations to go toward the shelter. The organization could also use some volunteers once construction starts to help with things like installing drywall and painting.

SAVE-MTR member Pat Anthony said in an email that the dream of building the shelter is moving forward thanks to the hard work and support from community members.

"No longer will our strays and abandoned animals be transported to Flagstaff where they are held for only a few days before being euthanized," she said. "They will have a warm and safe shelter, cared for by loving people until a forever home is found for them."