Williams resident has time, will volunteer
For Rodger Ely, retirement is no reason to slow down 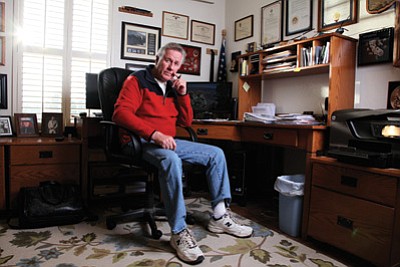 Rodger Ely takes a short break in his home office. Ely estimates he volunteers 40 hour a week with a number of organizations — making a place to stay organized a necessity. Ryan Williams/WGCN

WILLIAMS, Ariz. - When Williams resident Rodger Ely retired, his father told him he had better find a hobby to keep him busy.

Ely took that advice to heart and made giving back to the community his primary hobby.

The volunteering is more than enough to keep Ely busy during his retirement. Ely estimates that between attending meetings, helping with events and keeping records he spends about 40 hours each week volunteering-the equivalent of a full time job.

"I never thought time management would be a factor when I retired," he said.

With all of his commitments, Ely has even set up a home office so he has a place to work and organize materials.

Ely first started becoming active in his community during his time working as an electrical contractor in California.

"Being involved in the community is what I love to do," he said. "But you got to work for a living. When I was doing that I traveled and I didn't have time to do it or didn't have the ability to be able to go to luncheon meetings and stuff."

Retirement gave Ely the chance to devote more time to the volunteering.

As soon as Ely moved to Williams about two years ago, he started meeting different people who encouraged him to join various organizations here in town.

When Ely went to the police department to find out if it would serve his property, he met Bob McCarty, who told him about the Williams Sportsman's Club.

Then he went over to the American Legion where he saw sculptor Neil Logan working on the Williams Own Veterans Memorial statue. That led to Ely meeting with Mayor John Moore and getting involved with the memorial project.

After that, Ely ran into active volunteer Carol Glassburn at a mixer, who got him involved in Kiwanis and Clean and Beautiful.

"One thing led to another," he said. "I pretty well got involved in everything."

Ely is also actively involved with the American Legion and VFW, having served in the Marines in Vietnam as a machine gunner.

At this time of year with the tourist season starting, Ely can't always make it to every event with every organization he's involved in.

"So now the activities are starting, and the more organizations you're in the more you might have conflicts with double dates," he said. "So you have to prioritize without hurting feelings."

However, to Ely, that's not the worst problem to have.

"There's things called good stress and bad stress," Ely said. "Good stress is when you're working hard for the community. And then bad stress of course is dealing with the boss, and work and the IRS and all the issues of living."

Ely emphasized that he does not volunteer to get any kind of recognition, but rather because it is fulfilling.

"Because all these nonprofit groups are all helping people one way or another. Clean and Beautiful helps the town. Kiwanis helps the kids and other things. The other organizations help veterans," he said. "It's helping people because somebody has to do it. I think that's the satisfaction I get."