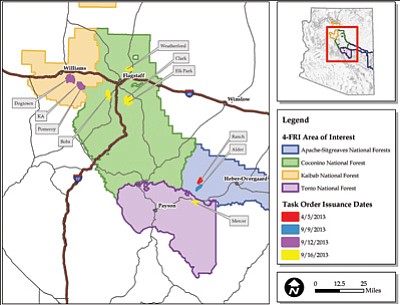 A new company has taken over the work laid out in the Four Forest Restoration Initiative, (4FRI) the largest forest restoration project in the country.

On Sept. 13, the Forest Service announced that Good Earth Power AZ LLC will take over the terms and conditions of Pioneer Forest Products' former contract.

"The Forest Service determined that the new company is both financially and technically able to perform and fulfill the terms of the original contract," said Mike Williams, Kaibab National Forest supervisor.

The Forest Service's contract with Pioneer Forest Products, signed in May 2012, included the thinning of 300,000 acres over 10 years. That agreement, the largest stewardship contract in Forest Service history, has now been transferred to Good Earth Power.

The 4FRI project spans 2.4 million acres within the Kaibab, Coconino, Tonto and Apache-Sitgreaves national forests. The goal of the project is to restore ecological resilience within the forests.

Jason Rosamond with Good Earth Power described the company as "a global organization with a main focus on sustainable development."

The company plans to use local loggers and mills to complete work on the initial task orders. Down the road, Good Earth plans to build a mill in Winslow, as well as locate additional pellet mills throughout the four forests. Eventually, Good Earth hopes to build a power plant to convert the natural biomass from the project into biofuels.

"We think this thing can actually change the entire region, and we hope it becomes something that is a model for the entire country to look at and a different way of doing things," Rosamond said.

Rosamond added that Good Earth gives half of its worldwide profits to communities where it works by supporting healthcare, education and small enterprise.

Marlin Johnson of Pioneer explained why the company chose to transfer the 4FRI contract to Good Earth after working for four years to acquire it. He said Pioneer depended on the USDA Forest Service contract to be used as collateral for development loans.

"Use of this basic strategy was common in the venture capital business. But it changed gradually in the last few years and has now completely evaporated with the change in the economy," Johnson said. "Now hard equity is required and none of the dozen or so financing proposals had that ability, leading to our frustrations as one after another of these proposals has backed out."

He added that Good Earth will still accomplish many of the same goals Pioneer had for the project.

"The original team is leaving this original concept tied to 4FRI," he said. "We feel very good leaving 4FRI in good hands with Good Earth Power."

Forest restoration under the 4FRI contract has already started. The Forest Service issued the first task order for the treatment of 932 acres on the Apache-Sitgreaves National Forest in April 2013, and work is almost finished.