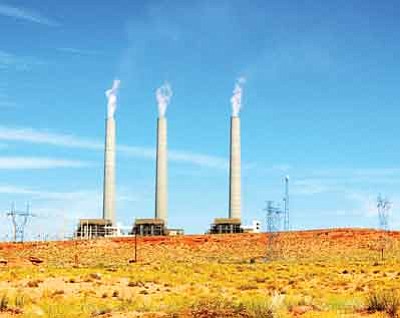 The Navajo Generating Station near Page burns locally mined coal, providing jobs and power, along with some of the highest carbon dioxide emissions among the nation’s power plants, a new report says. Photo/R.J. Hall via Wikipedia Commons

WASHINGTON - Arizona utilities operated three of the 50 dirtiest power plants in the country in 2011, according to a new report by an environmental advocacy group.

The Navajo Generating Station, the Four Corners Power Plant and the Springerville Generating Station were ranked 10th, 15th and 34th dirtiest in the nation in the report released Sept. 10 by Environment America.

The Salt River Project-(SRP) run Navajo Generating Station produced 15.9 million metric tons of carbon dioxide in 2011, equal to the emissions of 3.3 million cars, according to the report. Combined, the top 50 power plants on the list emitted more carbon dioxide than all the power plants in South Korea that year, the report said.

"We need strong rules based on science to make sure that power companies never again build another polluter like the Navajo Generating Station that would wreck our climate with runaway carbon pollution," said Bret Fanshaw, a spokesman for Environment America's Arizona branch, in a written statement Sept. 10.

Smedley said that for a large plant, the Navajo Generating Station is relatively efficient.

"If you had two smaller plants that generated the same power, they would do that with more CO2 emissions," Smedley said.

The dirtiest power plant in the country was Georgia Power Company's Plant Scherer, which emitted 21.3 million metric tons of carbon dioxide in 2011. Texas had the largest number of dirty power plants, with seven in the top 50.

SRP officials said the utility plans to clean up the Navajo Generating Station over the next several decades. The Environmental Protection Agency (EPA) ordered the plant to reduce nitrogen oxide emissions, and it announced a plan in July to either shut down one of the plant's three generating units by 2020 or to reduce its nitrogen oxide emissions by an equivalent amount by 2030.

Although SRP is only required to decrease nitrogen oxide emissions, the plan will also significantly cut down on carbon dioxide emissions, said Kelly Barr, the company's senior director of environmental management, policy and compliance.

Arizona Public Service (APS), which operates the Four Corners Power Plant in northwestern New Mexico, also has plans to reduce emissions at that plant. The company plans to close the three older units at the five-unit plant and to buy a larger stake in the remaining two units, which are more efficient.

"Environmental stewardship is important to APS," the company said in an emailed statement Thursday. "It is among our core corporate values. It is why APS-owned generation facilities emitted 1.5 million fewer tons of carbon dioxide in 2012 than in 2008."

Representatives for Tucson Electric Power did not respond to repeated requests for comment.

The APS-operated Cholla Power Plant was the only other Arizona plant on the Environment America list, ranked 85th.

The EPA said it will propose a limit next week on carbon dioxide emissions for new power plants, and new limits for existing power plants by June 2014. President Barack Obama those deadlines this June in a memorandum directing the EPA to set the limits.