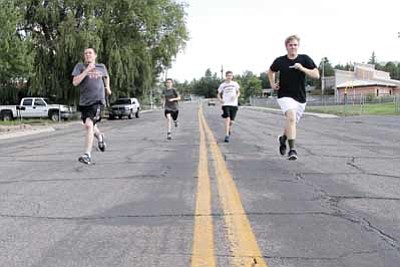 From left: Tyler Heggestad, Jorden Pirie, Alex Clark and Chris Shelton head out on a 30 minute run during a recent practice. Ryan Williams/WGCN

The new cross country program at Williams High School (WHS) is off and running in its first season.

About six boys and three girls are currently on the team. The group has been practicing Mondays through Thursdays since the second week of school.

The team also runs in different areas around town, like at Buckskinner Park or on Second Street, which is a hill.

"As the name implies, cross country is not on a track," Ayub said. "But it's usually not on a road either. It's on golf courses or it's on walking paths, out in the fields, it's just running."

On days when the rain and lightning force the team to practice indoors, Ayub said the team works on calisthenics.

"They need to do jumping jacks and pushups and mountain climbing and stationary power running and just a series of exercises that put them in shape," he said.

Ayub said cross country running is a tough sport, and other athletes can use it to train for their sports in the off season. Cross country is also a good option for students who are not interested in team sports.

"They're all just individuals," Ayub said. "It's a good avenue for those people who answer to the beat of a different drummer."

The state cross country competition will take place in early November. Prior to that, the team will compete in five to 10 meets. The courses at the meets range from 2.9 to 3.2 miles long.

Athletic director Phillip Echeverria said next season he would like to schedule some meets in Williams.

Williams-Elementary Middle School is also starting a cross country team this year. So far about 10 students are signed up. The team will start practicing once the governing board approves a coach.