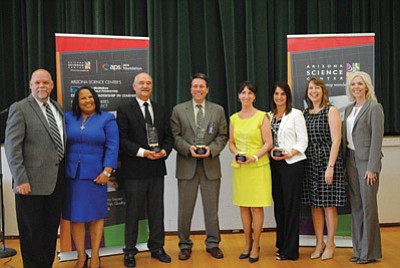 The goal of the program, through about $250,000 in grant money from the APS Foundation, is to improve science, technology, engineering and math education in rural areas while providing teacher mentors and training educators in Common Core Standards.

The Freeport-McMoRan Copper and Gold Foundation supports ASC's Center for Leadership in Learning. Professional Learning Specialist Rob Robertson said he embeds himself in the participating schools to support their needs onsite.

"The mentoring and coaching piece really is the backbone of what we do," Robertson said to the group. "Through the partnership, I'm able to be systemic and not just come in and drive up for the day and not see you again."

Sharon Kortman, Arizona Science Center's vice president of learning, made opening remarks and introduced each project participant during the meeting.

She said the number one impact to student achievement is the quality of teaching, which is primarily achieved through effective professional development.

"We're at a time right now where technology is advancing faster than we can catch up from a teaching and learning perspective," Kortman said.

Superintendent Barbara U'Ren said one of the school district's chief needs is training for the teachers who work with its large population of English language learners.

"This is our first year of having academic coaches in each of our schools," Watson said.

"Teachers should receive access to the greatest development mentoring and coaching no matter where you live or work," Stanton said.

Superintendent Rachel Savage said the Williams Unified School District is very bare bones, and estimates the financial benefit from the mentoring partnership to be into the hundreds of thousands of dollars.

"We are a small rural district in northern Arizona," she said. "We've had to make a lot of difficult financial decisions."

Kortman split the group in two to lead them through a team-building exercise where they each had to hold a tent rod aloft with their index fingers and lower it to the ground.

Though it took some time, one group managed to accomplish the task while the other ended up abandoning it.

Children and teachers alike are in an era of education where they are ingesting and delivering information in a very different way than in years past.

Equating it to when children hit a wall in their learning, Kortman said it helps for each group to have a model to look to.

"It's about us playing the game together and doing the tough work to problem solve," Kortman said.