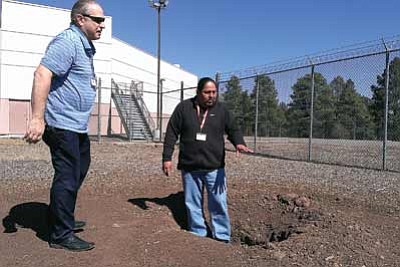 Kelvin Long, a Navajo who will serve as cultural adviser for a Native American religious program at the Coconino County Jail, and Jim Bret, program coordinator for detention services, look over the site of a fire pit that will be outside a sweat lodge planned for the jail. Andrew Knochel/Cronkite News

FLAGSTAFF, Ariz. - Kelvin Long, a Navajo who will serve as cultural adviser for a Native American religious program at the Coconino County Jail, inspects a circular rebar frame that will be covered with blankets to form a sweat lodge.

"The door should go over here - facing east," he says.

The jail houses around 500 people, about half of them are Native Americans, and many inmates, along with advocacy groups, have asked the sheriff to build a sweat lodge.

The structure will be ready for use later this year. Each inmate will be allowed to use the sweat lodge about once every three months.

"This is a great opportunity that the sheriff and the staff are providing for the inmates here," Long said. "It's a really beautiful opportunity for healing to happen."

The Coconino County Jail had established a sweat lodge in 2001 but discontinued its use a few years later because smoke was getting into the jail's air ventilation. The new structure and fire pit will be located farther from the jail.

The yard where the sweat lodge will be placed currently has a hogan, a traditional Navajo structure, that is used for other religious ceremonies.

Long said sweat lodges mean different things to different religions and practices. When he enters a sweat lodge, he seeks balance - to center his mental, emotional, physical and spiritual identity.

"We bring those four back together to create a whole human," he said. "We believe it takes all four of those to be whole."

The four cycles of ceremonies help people rebalance and recenter themselves to get their lives back on a good path, he said.

"They're at a place where they want to reconcile with themselves," he said. "I think that's the first step to reconciling with their families, with friends or with society at large."

Joe Martin, special adviser for Native American issues to the president of Northern Arizona University, said that for Navajos the sweat lodge experience cleanses and helps them build self-esteem.

"It's a way for them to have some sort of balance," Martin said. "It helps them make those adjustments."

Gabriel Galanda, an attorney and board member at Washington state-based prisoner advocacy group Huy, said that research has found that sweat lodge ceremonies are an effective way to prevent Native American inmates from returning to crime.

"Sweat lodge works in rehabilitating Native prisoners," he said. "They should be going into sweat lodges whenever and wherever possible."

Galanda said that since sweat lodges became more common in the U.S. after the civil rights era, detractors' claims that the ceremonies risked prison security have been unfounded.

"Security concerns can be overcome by best practices," he said. "And they have never been borne out."