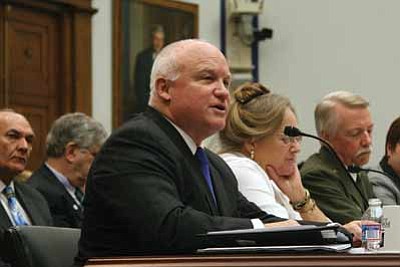 Tusayan Mayor Greg Bryan said the closure of Grand Canyon National Park has hit his town's economy and wondered why park service officials had not planned for a government shutdown in advance. Jack Fitzpatrick/Cronkite News

Bryan said that even if the Grand Canyon had to be closed, the park service could have used the last government shutdown - in 1995, when Arizona paid to partly reopen the park - as a template for opening the park more quickly this time.

"That application of that policy could have been easily put into place," Bryan said of the 1995 shutdown. "We don't understand why it wasn't."

His testimony came during a contentious, five-hour congressional hearing in which two House committees asked if the Obama administration made the shutdown "as painful as possible" to make political points - a contention derided as "nonsensical" by committee Democrats.

The Grand Canyon was one of the most high-profile of the 401 national parks and monuments that closed on Oct. 1 when the federal government shut down because Congress failed to agree on a budget for fiscal 2014.

On Oct. 12, Arizona reached a deal with the Interior Department to use state funds to reopen Grand Canyon National Park at a cost of $93,000 per day. Gov. Jan Brewer said Wednesday that the state would continue to fund park operations through Oct. 27, if necessary, although Congress was on the verge of passing a deal to reopen government Thursday.

"For 10 days, the park service refused - refused - to work with our local governments and businesses to keep these important economic drivers operating," Gosar said.

Bryan said Tusayan, a small town near the Grand Canyon whose economy is based almost entirely on tourism, has seen hotel occupancy rates fall from about 90 percent to about 40 percent during the shutdown.

But National Park Service Director Jonathan Jarvis defended the closure of the Grand Canyon and other national properties during the government shutdown, testifying that the parks had to be shut down to comply with federal law. That law blocks the government from performing functions for which money has not been appropriated, he said.

Jarvis said the park service can only use funds in a shutdown situation to protect life and property, adding that he immediately began looking for ways to reopen the closed parks using state or private funds.

Gosar and other Republicans asked why, if the park service had immediately begun looking to reopen parks, it took 10 days to reopen a high-profile property like Grand Canyon National Park.

Rep. Darrell Issa, R-Calif., noting Jarvis' claim that park closures were necessary to protect life and property, sarcastically said the Grand Canyon might have been attacked if it had not been closed during the shutdown.

Issa said Jarvis "asserted pain on people" by stalling to reopen parks to prove a point that he could "punish the American people by shutting down and taking away assets they cared about."

Democrats criticized Republicans for their accusatory tone in the hearing, which they called a distraction from the larger issue of the federal government shutdown. Rep. Raul Grijalva, D-Tucson, said Republicans were using Jarvis as a scapegoat.

Rep. Carol Shea-Porter, D-N.H., said she considered walking out of the hearing due to the lack of civility, and Rep. Jared Huffman, D-Calif., said it was a "sham of a hearing" that made "the McCarthy era look like the Enlightenment."

Rep. Peter DeFazio, D-Ore., criticized Republicans members of the House Natural Resources Committee and Oversight and Government Reform Committee for questioning why national parks would be closed during a federal government shutdown caused by Congress.

"Instead of trying to prevent economic hardship and potential financial disaster, we're having a hearing that is at best nonsensical," DeFazio said.