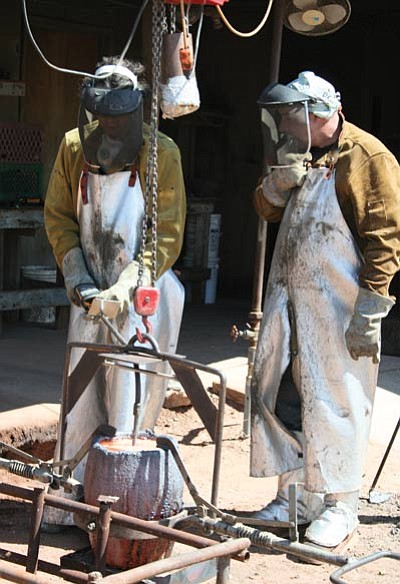 With the unveiling of the Williams Own Veterans Memorial set for Saturday at 11 a.m., the statue portion of the monument got some finishing touches last week.

Sculptor Neil Logan said the last time he saw the statue last Wednesday, he was directing the foundry workers on where to weld the gun, bayonet and hand grenade. The soldier portion of the statue, which workers cast in about 20 different pieces, was already welded together. After all of the items were attached, the final step was to apply a patina, or coloring, to the statue.

Logan plans to pick up the finished statue from the foundry in Sedona today or tomorrow.

The finished bronze statue will weigh about 300 pounds, compared to about 450 pounds when it was in its solid clay form.

Logan said he is happy the project will be unveiled soon.

"It's going to be a really neat statue. They did an amazing job down there," he said of the improvements to Monument Park.

Local veterans are also looking forward to the unveiling of the Williams Own Veterans Memorial.

Perico Avila, who is active with the American Legion Cordova Post 13, said the memorial will be good for the community.

"Most every community has something to honor their veterans and to show that we don't forget them," Avila said. "It's a great honor to show that they're not forgotten for the freedom that we have."

Avila hopes that several veterans will attend the dedication ceremony.

Rodger Ely, who is involved with both the Legion and the Matthew James Broehm Veterans of Foreign Wars (VFW) Post 12128, said it is impressive that the community came together to raise money for the memorial.

"It wasn't paid for by the city or by any entity or any grant," he said. "It was done through our own initiative, and I think that's what makes me most proud."

Ely said it is important to respect all veterans and their history.

"I had two Purple Hearts in Vietnam, so I know how important it is to these guys who survived and they think about the people that did not survive," Ely said. "That plagues us through the years-how'd the coin come up that we made it and they didn't."

George Riojas, commander of the VFW, said the memorial will honor veterans from the past, present and future.

"I was a medic in Vietnam and experiencing the loss of friends and even guys that I didn't know-these guys, they are the epitome of freedom," he said. "Those that were lost deserve a memorial, they deserve recognition."

Prior to the ceremony on Saturday, the Southwest Skye Pipes and Drums band will provide music and the American Legion Patriot Guard will ride their motorcycles around the loop at about 10:30 a.m.

The dedication ceremony itself starts at 11 a.m. Mayor John Moore will open the ceremony, and soon after the statue and monument wall will be unveiled.

The memorial will be dedicated in a military ceremony. Speakers at the ceremony will include Major Kim L. Gage, U.S. Army, the commander of the Navajo Army Depot, and Andy Tobin, the speaker of the Arizona House of Representatives.

After the ceremony, the Williams Clean and Beautiful Committee will serve food at the park. The American Legion Cordova Post 13 will also put on a reception after the event.

People can still be a part of the Williams Own Veterans Memorial by buying an engraved brick to honor a veteran. The American Legion is selling 180 bricks for $75 each. The four by eight inch bricks can fit three lines of text with 18 characters in each line. The bricks will line the edge of the pathways at Monument Park. Order forms are available at the American Legion, Red Garter Bed and Bakery, or from Carol Glassburn. More information is available from Glassburn at (928) 635-4503.