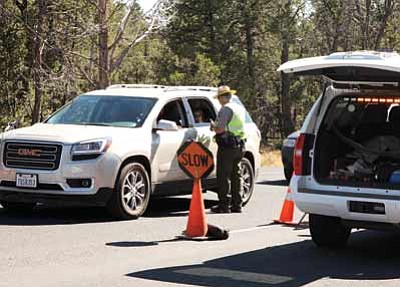 WASHINGTON - The government has said it's willing to discuss ways to reopen national parks during the federal shutdown, which is now in its tenth day.

According to a statement released Thursday morning, Department of the Interior Secretary Sally Jewell will consider agreements with Governors who have shown an interest and ability to fully fund National Park Service (NPS) employees to reopen national parks in their states.

"The Interior Department will begin conversations about how to proceed as expeditiously as current limited resources allow," the statement said. "We continue to call on Congress to act swiftly to enact appropriations for the entire government so that we can re-open all 401 national parks for the American people."

Residents in the Grand Canyon's gateway town of Tusayan have raised almost $400,000 to reopen a Grand Canyon viewpoint, possibly Mather Point, and Highway 64 between Tusayan and Cameron. During a recent Tusayan Town Council special meeting, Mayor Greg Bryan said a partial reopening would cost an estimated $19,000 a day.

But even with those financial promises, park officials have said it isn't possible to accept third-party donations.

As a result of the government shutdown, the Department of the Interior was forced to close all national parks across the country last week and furlough more than 20,000 NPS employees who ensure the safety of visitors and the security of the resources.

Inside Grand Canyon National Park, 438 government employees are on furlough because of the shutdown and approximately 1,400 concessions employees could be affected. The only NPS employees that remain on duty are providing security and emergency services.

The park takes in around 18,000 visitors each day in October, and will lose an estimated $55,000 in revenue each day because of the shutdown.