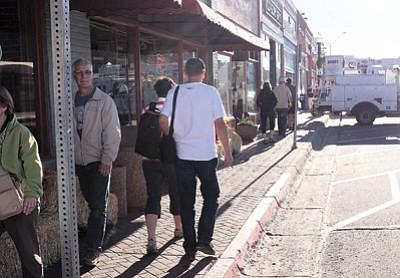 Tourists walk along Route 66 in downtown Williams last week. While some local businesses reported cancellations after the government shutdown caused the closure of Grand Canyon National Park, others, including Bearizona, saw an immediate uptick in business. Ryan Williams/WGCN

Tourism sustains the economy in Williams, and October is usually the last major month for visitors before the winter lull.

But with the federal government shutdown preventing tourists from visiting the Grand Canyon, several local businesses are feeling the sting.

All three tour groups Mason had scheduled for last week canceled. And while other companies take tourists to Sedona or on the Indian reservations, Mason's business focuses solely on the Grand Canyon.

Also affected is Claire Kirby, owner of the Sheridan House Inn Bed and Breakfast. Kirby had two cancellations the day after the shutdown.

"If someone cancels one room it's a seventh of our revenue for that night," Kirby said.

Several of Kirby's guests were already in town when the shutdown occurred and could not reschedule, so Kirby suggested alternative sightseeing ideas for them.

"We're recommending helicopters or Skywalk, both of which are commercial enterprises and costly. But that is the way you're going to see the Canyon," Kirby said. "Along the way we are actually sending people away from Williams."

Kirby said overall her guests have been sad and disappointed.

"The biggest question they have for us is 'why?' It's a very difficult question to answer," she said. "It's very very stressful I think for everybody right now to see people sitting there shell-shocked wondering why they can't go (to the Canyon)."

However, not all businesses are suffering with the closure of the Grand Canyon. Some are even seeing a temporary spike in business.

Bearizona CEO Sean Casey said he saw a 70 percent increase in visitors in the days after the shutdown, although he expected that to taper off as visitors learned of the Canyon closure.

"I am not sure what the future holds, but if our visitor surveys are accurate, we think we will be reasonably okay," Casey said. "Our past surveys have indicated that 55 percent of our guests were not planning on visiting the Grand Canyon, so I hope that we can weather this temporary dysfunctional storm."

John Holst, owner of the Red Garter Bed and Bakery, said he's encouraged guests to consider alternatives to visiting the Grand Canyon, such as taking a flight over the Canyon, visiting Sedona or exploring Williams. As of Thursday, Holst said he hadn't had any cancellations.

"We're disappointed on one hand but pleased that there's so much going on in town that people are sticking around, spending a day or two in small-town America and enjoying what we've got-everything except for the Grand Canyon," he said.

About 700 visitors per day have stopped by the Williams and Forest Service Visitor Center to ask about alternatives to visiting the Grand Canyon, according to a press release from the Williams-Grand Canyon Chamber of Commerce.

Mayor John Moore said businesses in Williams did well last week, but that might slow down in the coming days.

"When you got lemons, you make lemonade," he said. "We as a town need to encourage people to visit, stay here and look at our stores, visit Bearizona, take a trip through the forest. We can't do anything to open the Canyon, but we can make our town more convenient for the tourists that are here."

Tourists who were already in town when the shutdown occurred found themselves scrambling to make other plans after the closure of the Grand Canyon.

Echo Chen came to the United States from Singapore specifically to visit the Grand Canyon and Yellowstone National Park, both of which are now closed because of the government shutdown.

"We still have to go because our ticket, accommodation, even car rental, everything is booked," Chen said.

After paying thousands of dollars to come to the United States, Chen said she and her fiance had few choices besides paying about $200 for a helicopter ride to be able to see the Canyon at all.

"Compared to our initial thoughts is we want to walk around in the Grand Canyon-it's just disappointing," she said.

"The government is really pushing all the monies to the private companies, which is not what they are trying to do," Chen said.

But despite Chen's disappointment about the outcome of her trip, she tried to stay optimistic.

"We have to think positively," she said. "We wouldn't have gone on to the helicopter tour if we are able to go into the park."

Another tourist frustrated by the shutdown was Gaby Daza, who was visiting the United States from Ecuador. She came to northern Arizona from Las Vegas last Tuesday, the first day of the shutdown.

"We drive yesterday from there to go to the Canyon and then we discover everything," she said. "But we had the reservations so we decide to stay, but we didn't see anything."

Daza said she had planned her trip about a month in advance.

"For us tourists, it's really inconvenient," she said. "If you plan beforehand one week or two weeks to go to all the national museums and everything, to be here and not be able to visit is really bad."

Daza planned to visit the Skywalk before returning to Las Vegas, but was unhappy that tourists are not allowed to take their own pictures at the attraction.

Besides affecting local businesses and tourists from around the world, the government shutdown has also influenced community members.

Williams resident and Sheridan House Inn employee Devin Jenks protested the government shutdown on Route 66 with her kids last Tuesday after her husband was furloughed.

One of Jenks' kids made a sign saying, "Give my dad his job back." Jenks said her kids made the signs themselves after seeing other protesters on the news.

"They're like, 'We should do that.' I was like, 'Alright, get some signs,' and they started writing all that stuff up," Jenks said.

Jenks' husband works in IT for the Department of the Interior. His job is now on hold, and like everyone else, he is unsure how long the shutdown will last.

"It's not paid vacation, but it's time off," Jenks said. "So we try to be positive."