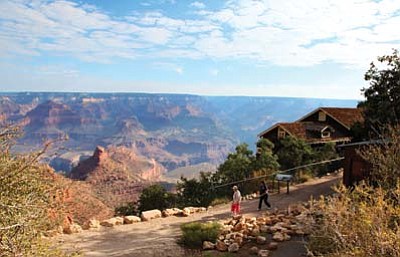 At Tusayan's town council regular meeting last night, Park Superintendent Dave Uberuaga said all parks in the country will stay closed, even if enough money is offered to partially open them.

"Some have reflected back on the 1995 event, and say 'well, we did it then, why can't we do it now,'" Uberuaga told council members. "Bottom line, any third-party funding of the national park opening will not occur. This is a fundamental core operation of the federal government provided for by government appropriations by the U.S. Congress."

However, the news hasn't deterred local business owners from their efforts to resurrect the park.

Red Feather Properties' Clarinda Vail, who is spearheading the effort, said she's not giving up hope.

"We've thrown out ideas to the Park Service and to the mayor, just to figure out any other idea, even if it's just shuttles from Tusayan, period. Where no one goes into the park and they could have complete control over where they take them," Vail said. "I'd rather have, I don't know, an hour at the park than not be able to go at all."

Referencing an article from Tucson's Arizona Daily Star, Vail said it took $17,000 to keep the park running for a day with very limited operations. That number has more than likely changed 18 years later, but Vail said she, and other business owners, are willing to make up the difference.

And if businesses can get fundraising numbers big enough, maybe "they can get somebody to care," Vail said.

"I just think that if private entitles are able to step up and say that we'll help and fund to keep the Grand Canyon open for a while, I think it should be considered," Vail said. "We need our governor, Congress, Senate, everyone to not use our National Park Service as a pawn in this."

Tusayan Town Council has scheduled a special meeting tonight at 6 p.m. to discuss this topic further. More on this story will be available as it develops.