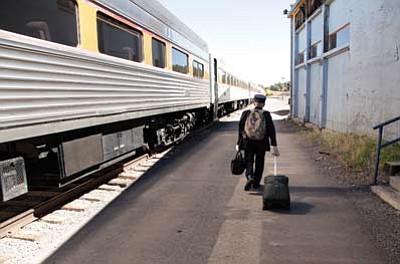 GRAND CANYON, Ariz. - After congress failed to pass a budget bill or appropriation bill Oct. 1 forcing a government shutdown, all national parks, including Grand Canyon are closed, leaving many local businesses scrambling to cut their losses.

The Park Service will not permit visitors to enter Grand Canyon and overnight visitors already inside the park have 48 hours to make alternate arrangements and leave.

All Grand Canyon Association (GCA) stores are closed inside the park, which comes to around $20,000 a day in financial losses, Miriam Robbins, director of communications and publishing said. The GCA is a private entity, so the organization is still open and working on its non-profit efforts.

GCA store staff is still working at stores inside the park that aren't affiliated with the visitor centers doing maintenance and cleaning. But after a week of shutdown, GCS will have to ask some of its employees to take leave.

"We are going to wait and see how this plays out before we make that decision," Robbins said.

Greg Bryan, general manager of the Best Western Squire Inn Premiere in Tusayan, said the hotel is already seeing a surge of cancellations that will have a significant effect on revenue.

"We were actually sold out through mid-October and this is going to have a very real impact on, not only our lodging, but food and beverage sales," Bryan said. "When I came in this morning I saw at least 20 to 25 cancellations."

If the shutdown continues, the Squire Inn's estimated occupancy will drop to around 30 percent, which means the hotel will have to start cutting back on staff.

However, for visitors already in Tusayan, Bryan said his staff is suggesting other sightseeing alternatives, such as Jeep Tours, Forest Service tours, flights over the Canyon, trail rides and Bearizona.

"But that's difficult when their goal was to visit the Grand Canyon," Bryan said. "We hope that it ends quickly and feel badly for our visitors who have come from all over the world to see the Canyon."

The Grand Canyon Railway is canceling reservations with full refunds for area visitors who don't want to take a chance on when the shutdown will end. The company's restaurants and gift shops in Williams will stay open, but its trains to the South Rim won't be operating.

"No guests will be out of any deposits," said Bruce Brossman, director of sales and marketing for Xanterra South Rim. "We are trying to reroute people from the South Rim to the railway hotel. We are offering them as many rooms as we can find. Of course that inventory is changing by the minute because people are canceling for tomorrow or tonight."

Grand Canyon Railway train conductor Bernie Heimenz said the train will take customers out of the Grand Canyon, but after that, his job is on hold until the park opens again.

"Just today. We're done until something happens," Heimenz said, who won't be getting a paycheck while on furlough.

John Dillon, the company's executive director, said the association was forced to cancel 12 commercial river trips, which will cost them $900,000 in gross revenue.

"That number does not take into effect the economic multipliers, if you think about transportation, hotel rooms and food," Dillion said. "It ripples all the way though the system. Not to mention the guides that were supposed to be taking those trips are now basically furloughed. It's felt deep."

"That's the only impact I see at this point," Halpin said. "So if you're coming over to take a ground tour, they aren't operating right now. But aircraft and helicopter tours seem to be operating normally."

Grand Canyon Imax Theater is prepared for the shutdown to last two weeks and is closing its doors two hours earlier - from 10 p.m. to 8 p.m. The change in closing time moves its movie showing from 8:30 p.m. to 6:30 p.m.

"I'm expecting after two days to be working with a skeleton crew," general manager Janet Rosener said. "If the park is closed for two whole weeks, that's a big impact. That's going to cost us probably $125,000 just in movie ticket revenue, not including food and gift shop."

Rosener said she is already seeing a lot of upset visitors.

"I just talked to a couple of young women who have driven across country and they're almost out of money and they need to get back home somehow. This was their budget to come to the Grand Canyon," Rosener said. "There are a lot of stories like that."

Williams resident Dave Thayer owns Canyon Dave Tours. He said the government shutdown could mean the end of his business.

"It's conceivable that I've lost my whole business," Thayer said. "We pretty much live hand to mouth like everybody else in Williams."

Thayer said he had nine people scheduled for a tour today to the Grand Canyon.

Thayer has tours booked through the week - none of which will happen while Grand Canyon remains closed. Thayer's tour business also gives geology talks to tour bus groups at the south rim, almost every day. All the buses have cancelled their tours for the week as well.

"We can't afford that," Thayer said. "We don't have that kind of money."

October is usually a big month for Thayer.

"And now it's not going to be anything," he said. "And we need money to save up for the winter and October is what does that."